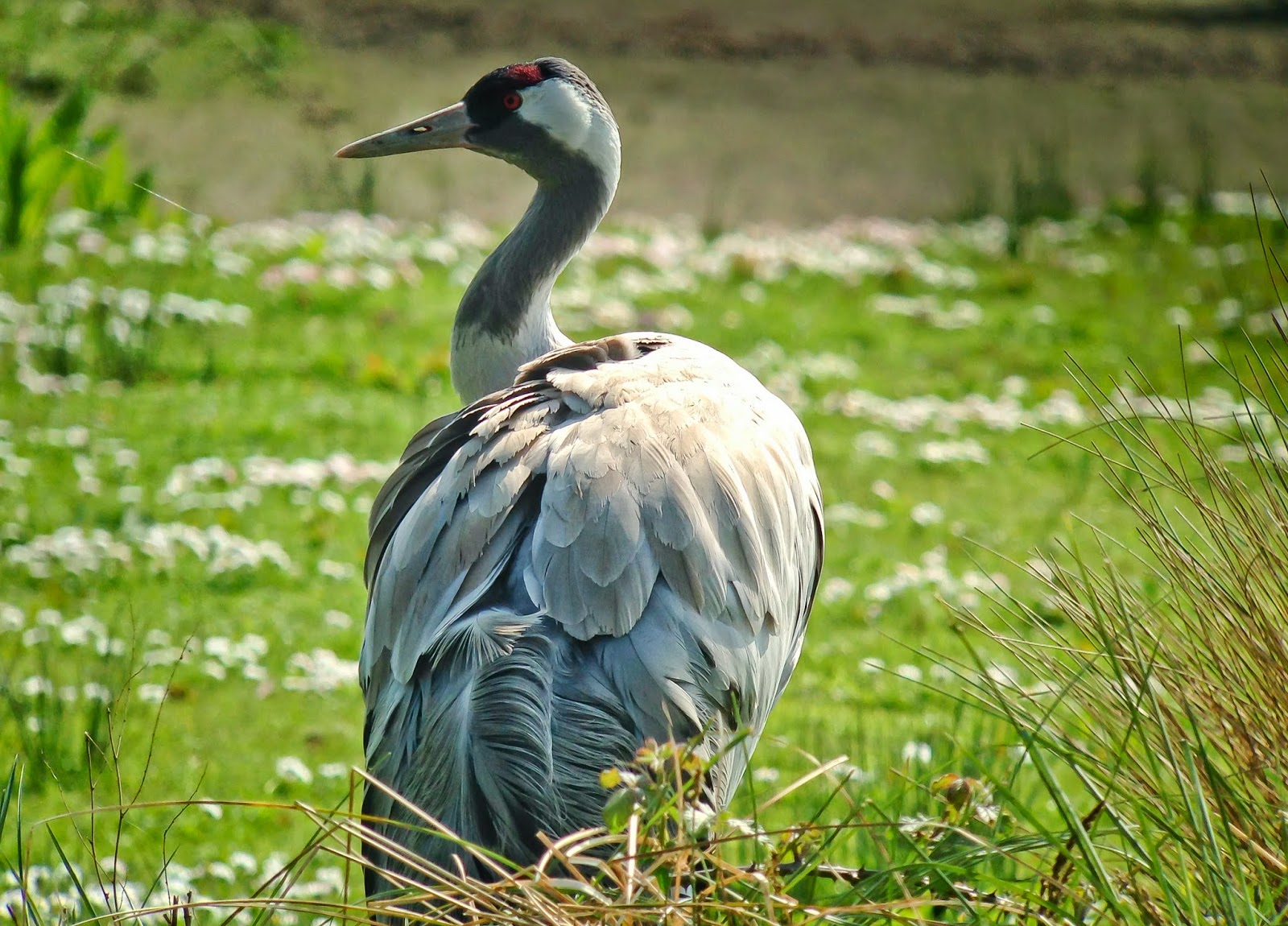 Its hard to believe but its now been over three decades since the Common Crane made a return to the UK as a breeding bird. That in itself is impressive, but when you consider, it had been 400 years since these birds had last breed; you then begin to understand how utterly amazing and significant this is - In 1979 two Common Cranes stopped over on migration near Hickling Broad in Norfolk: and stayed! Two years later they successfully raised 1 young; so began the recolonization of the Common Crane in Norfolk. 30 years later there are nearly 20  breeding pairs, 2 pairs at Lakenheath Fen and another pair at an undisclosed site in Scotland. The Norfolk Crane's Story. 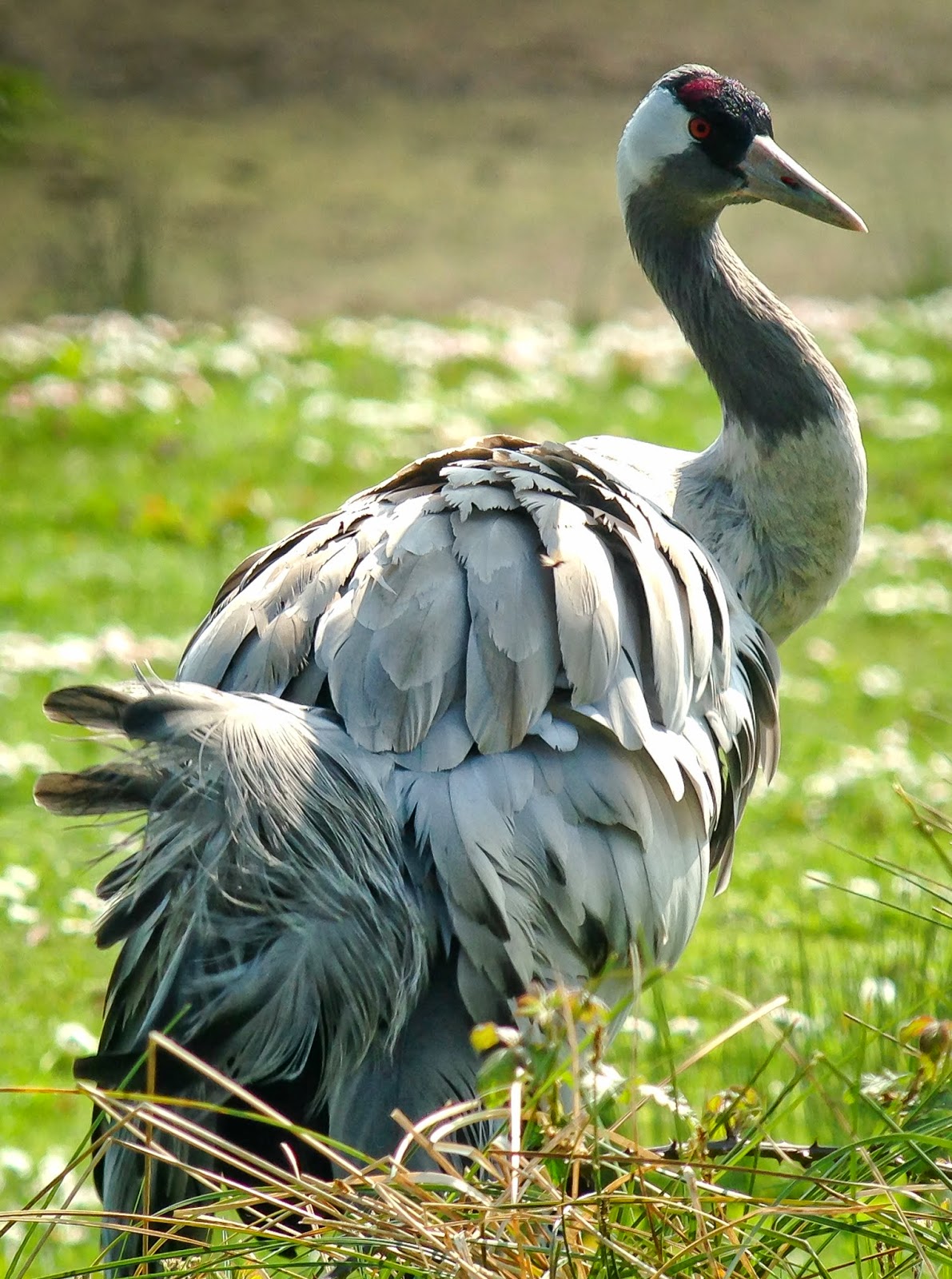 In 2010 the The Great Crane Project began; a five year program to re-establish these magnificent birds back into areas where they once thrived - The Somerset Levels Click on the link above for details including a fantastic 30 minute video telling the whole story. My own tale starts on the 20th April 2014 when I noticed a headline posted on facebook reading 'Common Cranes nesting at Slimbridge; if successful it will be the first crane to be hatched in the wild in the west country for 400 years!' On the 21st of April 2014 I was heading west on the M4 - destination Slimbridge!


This was my first visit to Slimbridge so after paying my entry fee I grabbed a map and made my way around some of the hides. There were 4 Common Crane seen from one hide, these were free flying individuals from the Somerset Levels, not clipped exotics. Other wild species included Avocet, Black-tailed Godwit, Redshank, Lapwing, Common Sandpiper and Ruff + the expected duck species.

I eventually made my way to the Martin Smith Hide, the number one place to view these breeding celebrities. Luckily, the pair had chosen a nest site far enough away from the hide not to be disturbed, however, a sign does remind people to keep voices down. Here I met Derek, a volunteer with The Great Crane Project. Derek was kind enough to fill me in on the history of the pair we were observing.

Both birds were hatched in 2010 (April / May) and released onto the Somerset Levels in August 2010. They returned in 2013 to Slimbridge showing a connection as a pair; dancing, trumpeting together, pirouetting etc. In fact they did make a nest and lay eggs but their breeding attempt failed - bad weather is presumed to be the culprit. Derek also informed that there had been a few fatalities as expected. One individual was killed by a fox, another hit an overhead power cable, and yet another was missing. However, the overall survival rates are looking good. 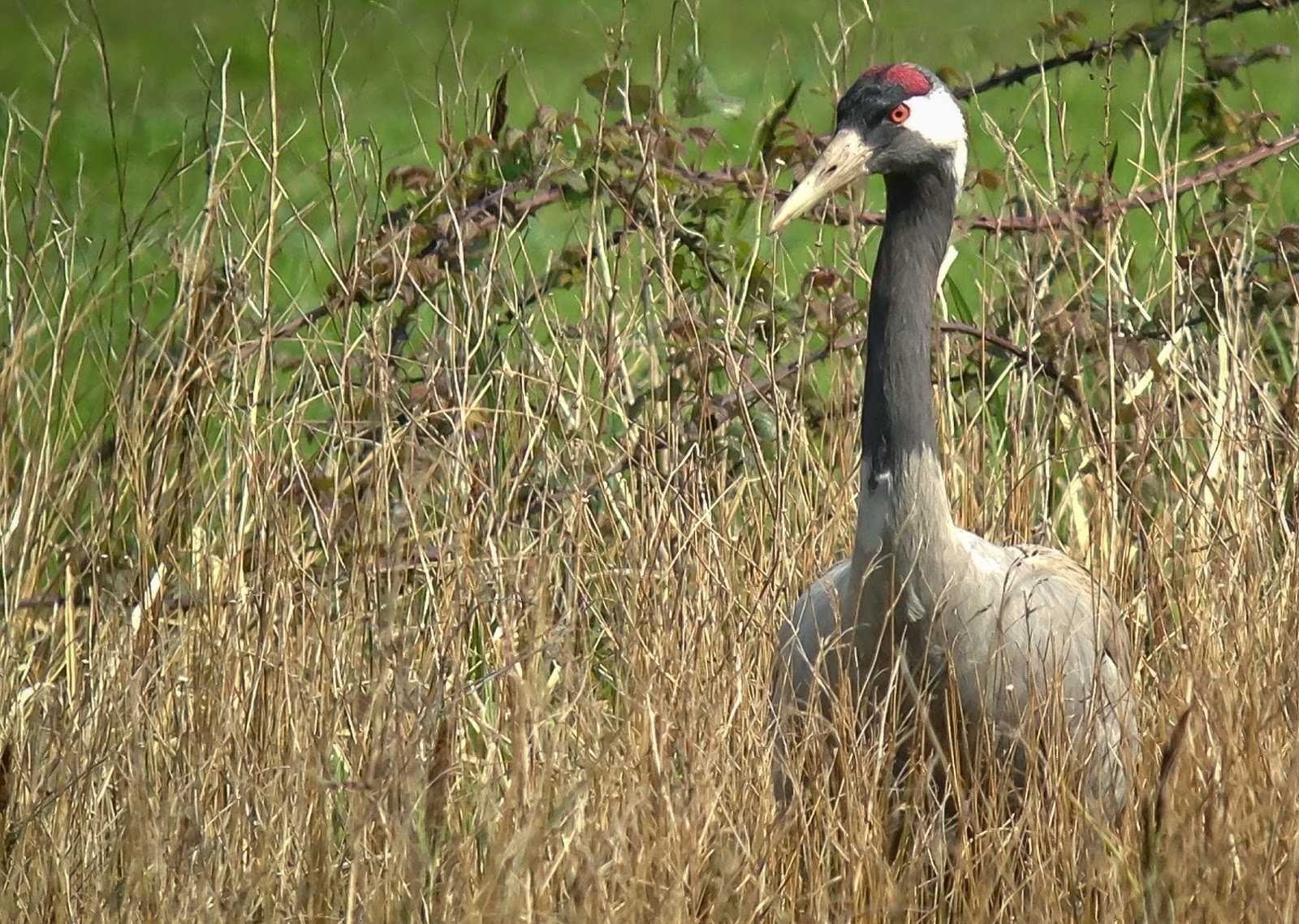 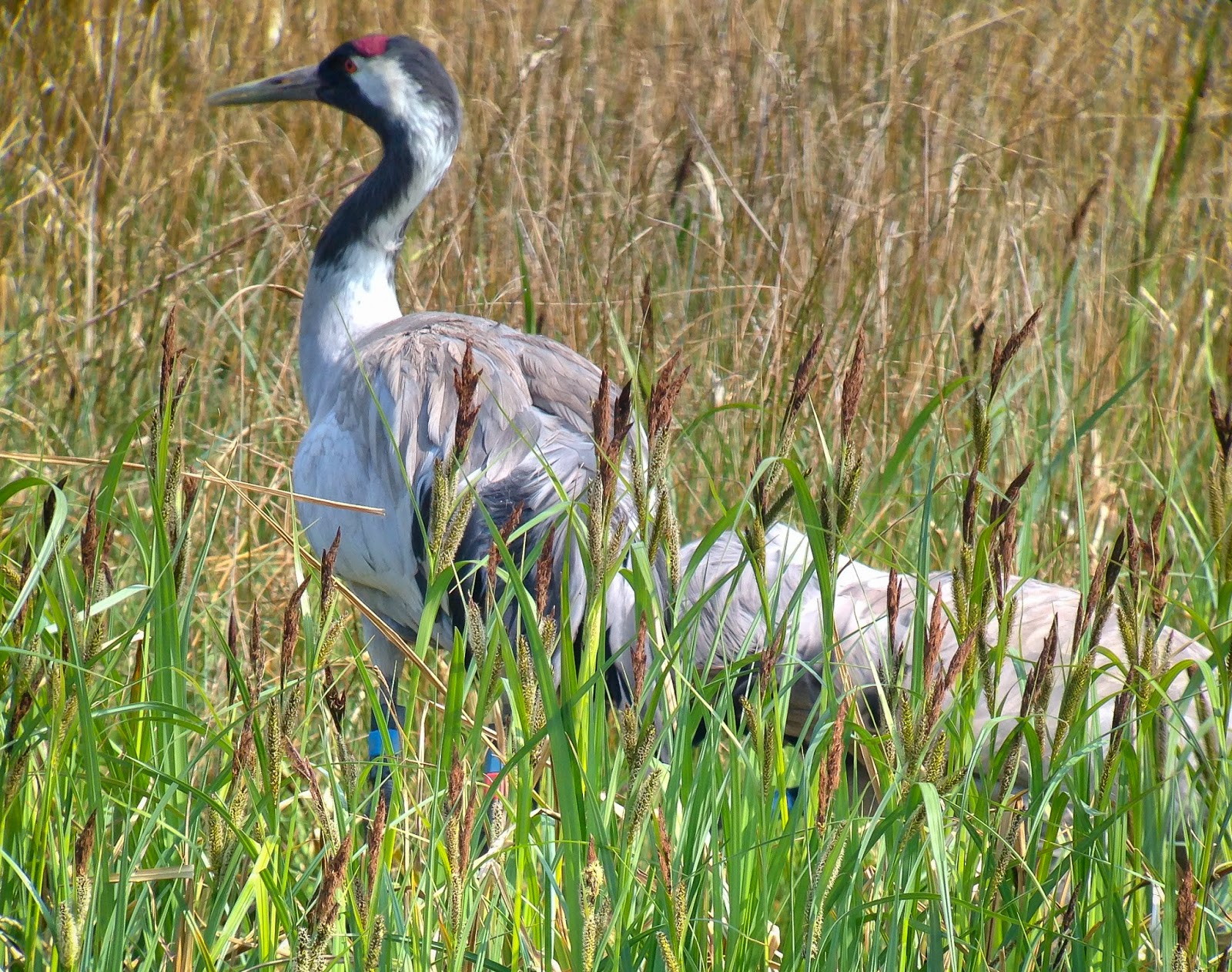 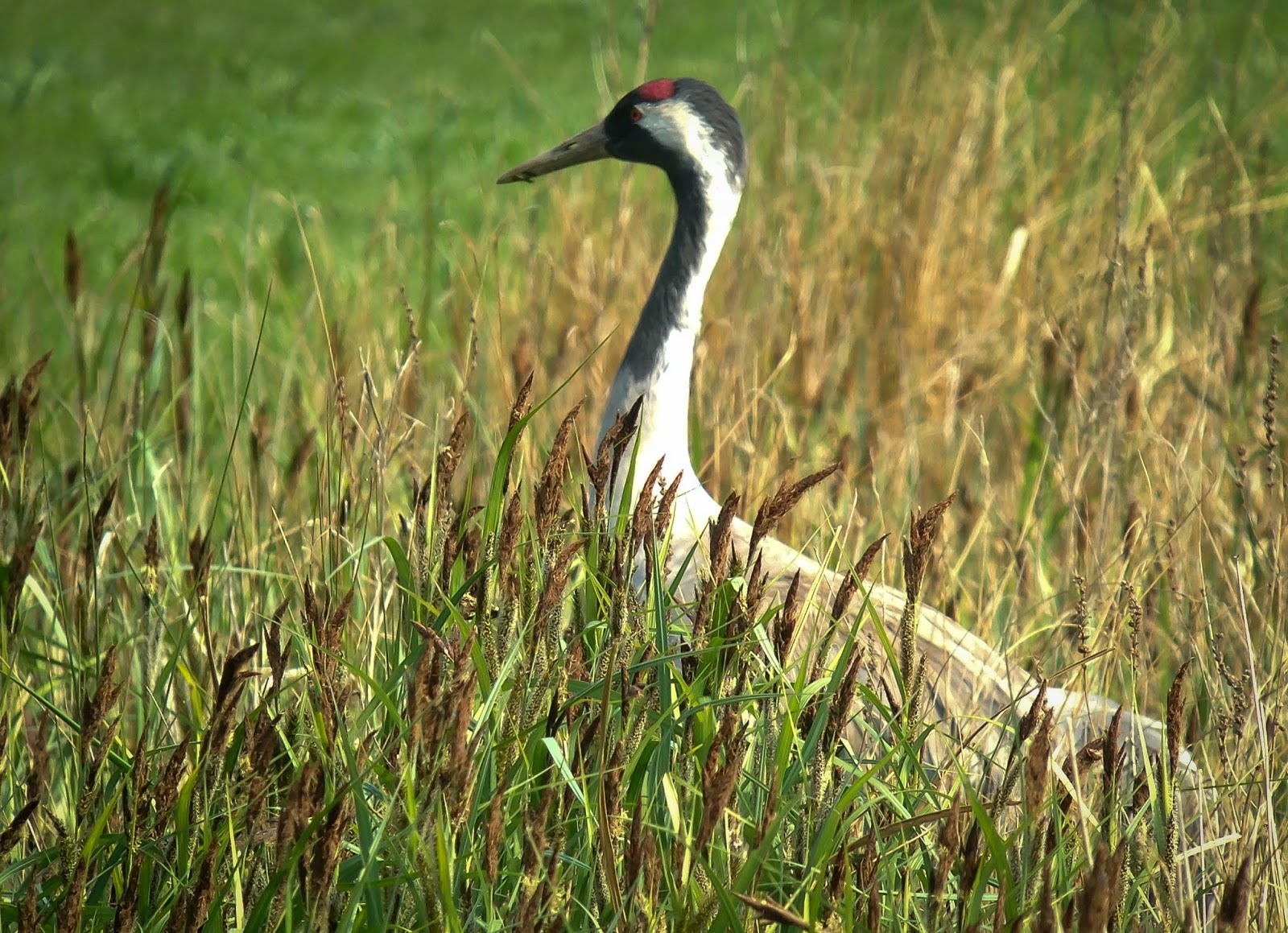 During my time at the hide the female was on the nest and the male was at the back of the reed bed. At one point 4 other cranes circled around the site but didn't land. Previously some cranes had landed but had been attacked and forced to leave by both male and female. These attacks involved bill stabbing, kicking and wing slapping. For a species that is very social during most of the year, it certainly shows a low tolerance for company during breeding season. Before I departed the male made his way over to the nest where he took over incubation. The female remained next to the nest preening. I felt very privileged to witness a small part of what could be a very exciting time for not only the cranes but for all involved in this amazing project. I lived out in Canada for ten years; when I returned in 2011 Red Kites were flying over Woking football ground! Who would of believed that? So who's to say where we will see these giants one day?