September 07, 2013
My family and I spent a wonderful week in Wales in the middle of August. We started our trip on Sunday 18th at the Rutland Bird Fair, held at Rutland Water. Here, we finally met up with our good friend Jon Carter. We first met Jon and his wife Jenny while living on Vancouver Island some years ago, but have not seen them for the last two. Jon now works for the RSPB.

The Bird Fair was as good as always, and for me, what made it extra special, was not only meeting up with Jon but also meeting Mark Cocker. Mark was at the fair signing copies of his new book Birds and People, along with David Tipling who did the photography. After the fair we headed west to Shropshire where we spent our first night at Wilderhope Manor. 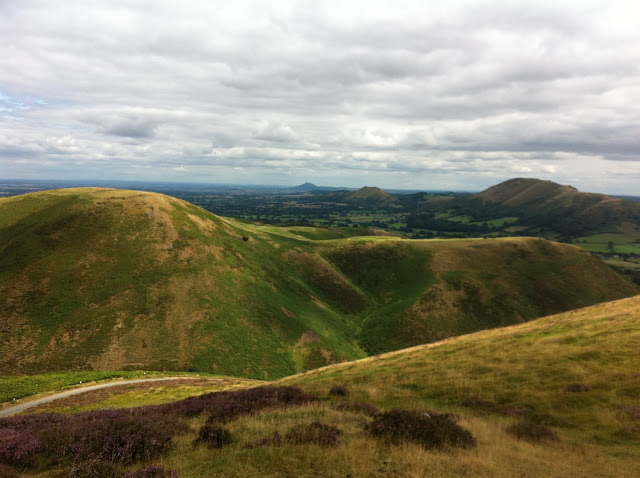 Noteworthy birds en-route were Common Buzzard, Kestrel and Red Kite. There was a fly-by Sparrowhawk at the manor along with nesting Swallows and two Tawny Owl heard calling. The following morning we took a short walk up on Long Mynd before heading across the border into Wales, and to our home for the next 4 nights: Snowdon Ranger Station. 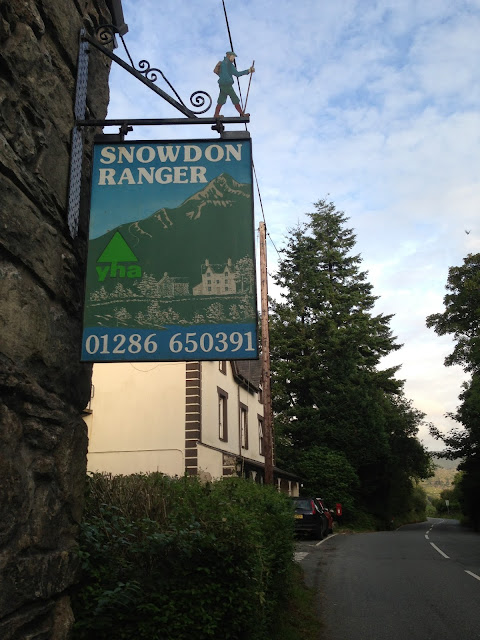 After settling in we headed out for some pub food before turning in for the night. The following morning I headed southwest along the arm of Wales to Aberdaron, while Lori and Nolan headed on a bike ride to Porthmadog. My days agenda had already been pre-booked with Bardsey Boat Trips. I arrived an hour early at Porth Meudwy, so took the opportunity to bird the cliffs above the beach and across the Irish Sea. 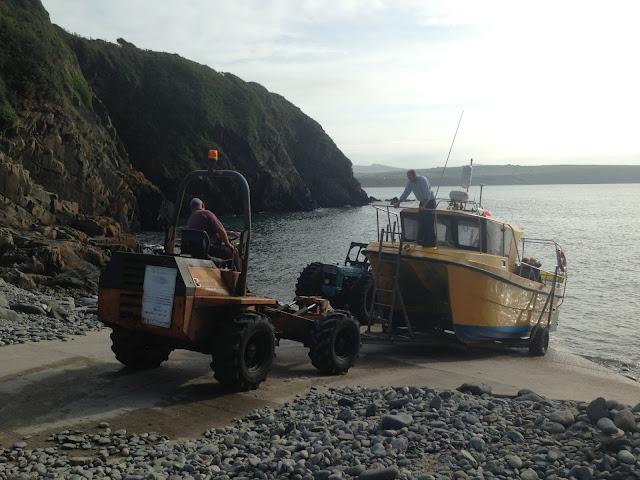 A family of Raven and a pair of Chough kept me cranking my head upwards from my vigil with their distinctive calls. Out at sea there was a continual movement of Manx Shearwater; 84 birds seen while I was scanning for about 10 minutes. These birds are mostly breeders from Bardsey Island but do not return to their burrows until night time; this behavior is to avoid predators such as gulls. They often gather in rafts offshore until its time to return to the burrow. 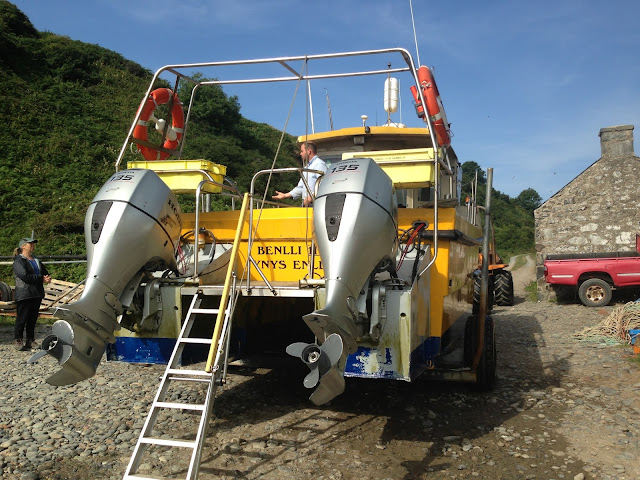 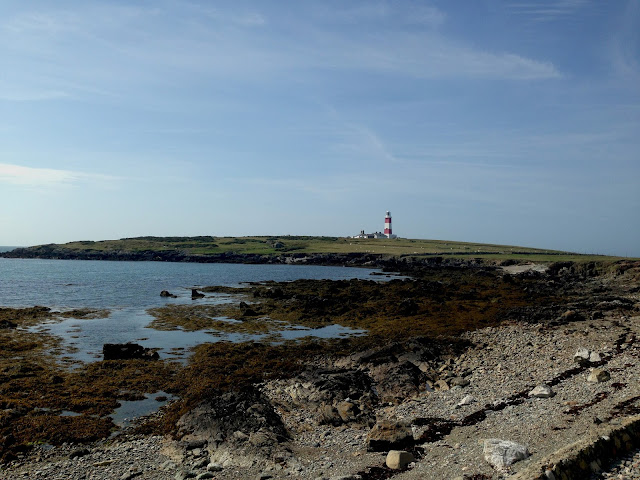 When the boat arrived it was pulled from the water with a big dumper so that we could get on board. The ride across to Bardsey went relatively quickly as the sea was calm and the weather good. Once on Terra firma I made my way out towards the lighthouse. Wheatear and Linnet were present in good numbers and on the rocks offshore were Oystercatcher and 44 Whimbrel. Gulls were represented by Herring Gull, Lesser Black-backed Gull, Great Black-backed Gull and Kittiwake. What else - Shag, Cormorant, Fulmar, Peregrine Falcon, Pied Wagtail, Meadow Pipit, Sand Martin, House Martin, Swallow, Chough and Magpie. 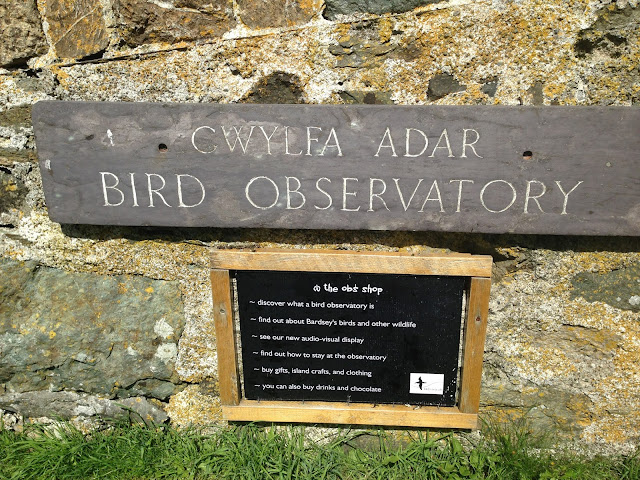 My main reason for coming to the island was to visit the famous Bardsey Bird and Field Observatory. My hope was to meet the warden and some of the volunteers; what happened has morphed into one of my most memorable days! Steven Stansfield, warden here for 16 seasons, greeted me warmly and explained some of the work being performed. He then informed me that some Manx Shearwaters were going to be ringed at 14:00 and that I was welcome to join the group. Unfortunately my boat was leaving at 15:00 and I would not be able to make it across the island in time. My utter disappointment must of prompted Steven's reaction; "Come with me", he said. So, I followed Steven and a volunteer up a hillside and got my own personal viewing of a Manx Shearweater chick! 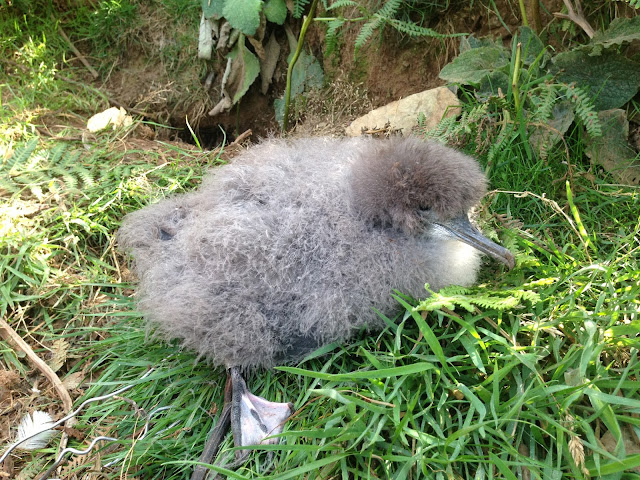 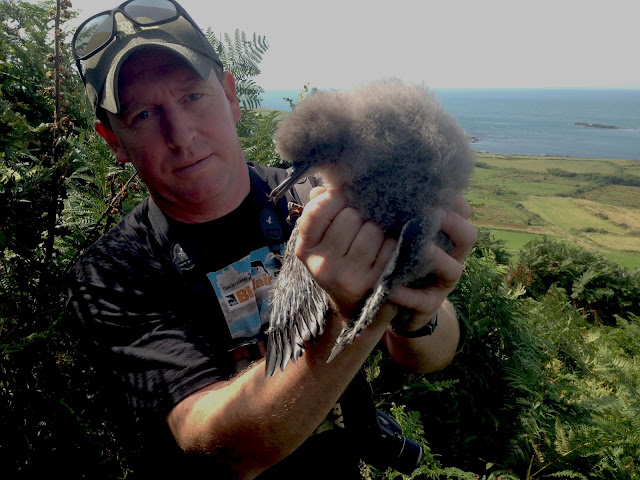 I was absolutely blown away by Steven's hospitality, knowledge and generous gesture. This was the highlight of my holiday and I feel extremely privileged to have experienced such a wonderful personal encounter. This little fluff ball that has only known life in a dark welsh burrow, once fully grown, will leave the safety of its nest and head out into the Irish Sea. It will keep heading southwest until it cruises over the waves off Argentina. Here it will spend the next 4-5 YEARS; not touching land until it returns to the place of its birth. Click here to learn more... 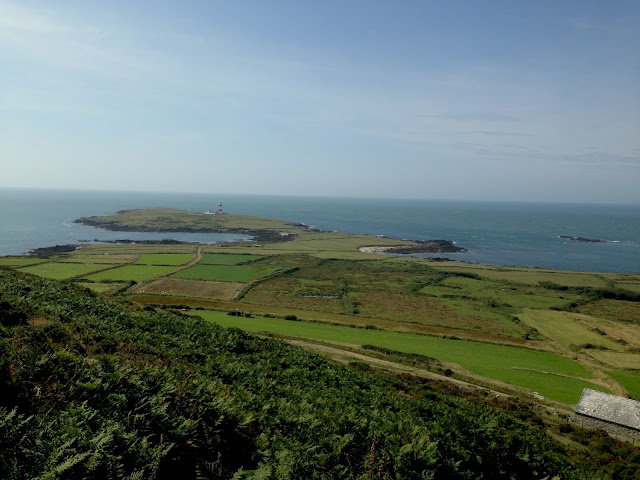 After the euphoria of my shearwater experience, I hiked up the hill to get a better feel of the island. Here I watched Chough and Lesser Black-backed Gulls until it was time to return to catch the boat. En-route back a young lad pulled up on a quad-bike and said "are you Rich Mooney?" Ben Porter lives on the island with his family where they manage a farm. I have been following Ben's blog: Bardsey Wildlife, for some time and sent a message to Ben prior leaving on holiday. We chatted for a while, but alas, I had to catch a boat and Ben had work. Check out his very cool blog above on the daily changes in Bardsey Wildlife and Ben's amazing photography. 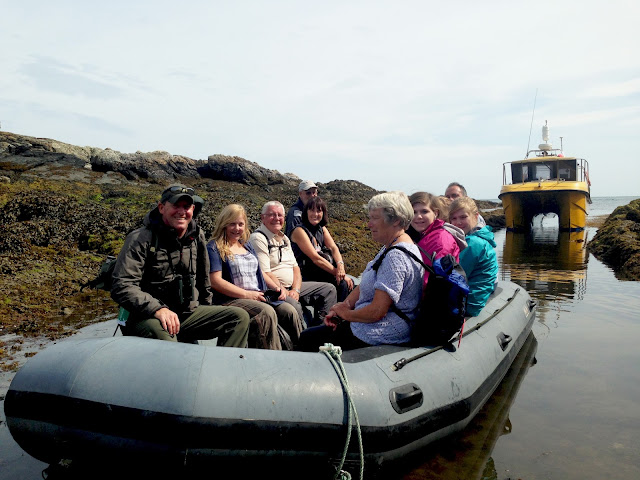 The following day we visited a few different spots including South Stack RSPB Reserve on Anglesey. It was pretty foggy but we did get looks at a pair of Chough. This is one of the most reliable places to see this species. 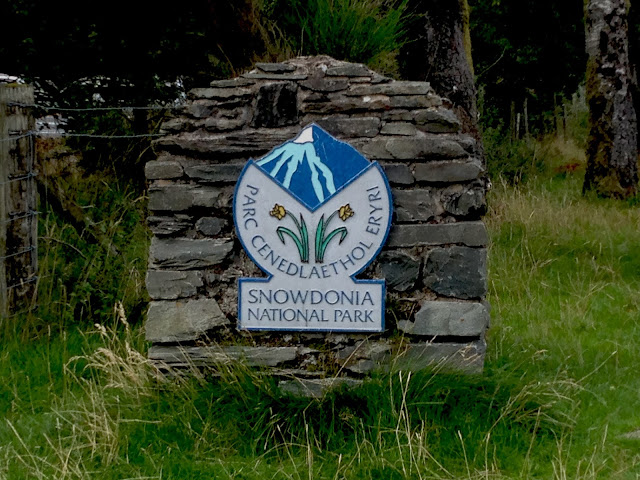 Our route up Mount Snowdon was via the Pyg Track. It took approximately 2 1/2 hours to reach the summit; though mostly foggy, was a good hike. We had a nice break up top and were rewarded with spectacular views as the fog finally disappeared. Meadow Pipit, Wheatear, Wren, Raven and Herring Gull were the only birds I noticed. 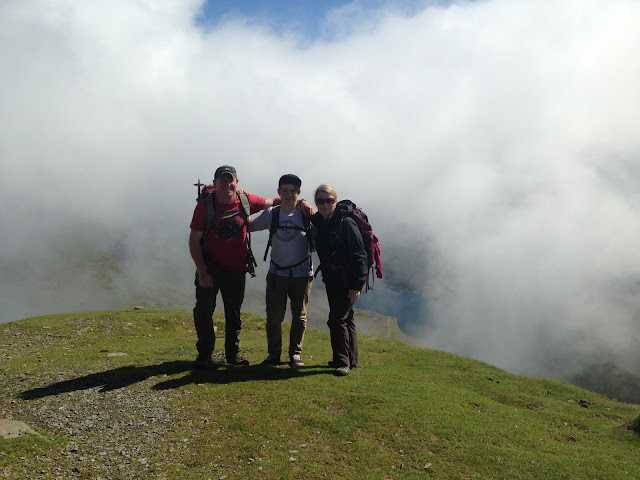 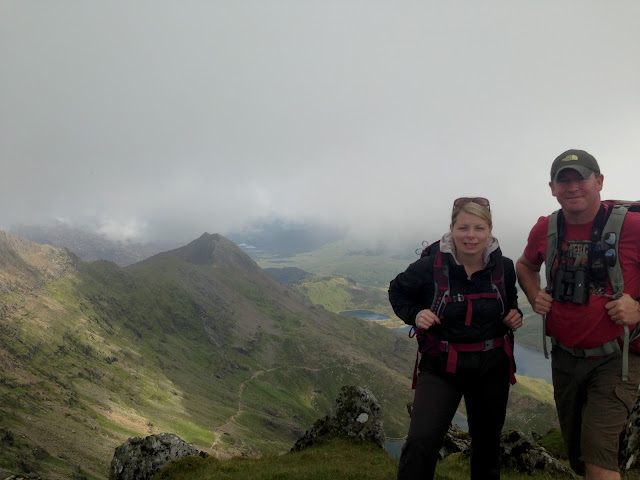 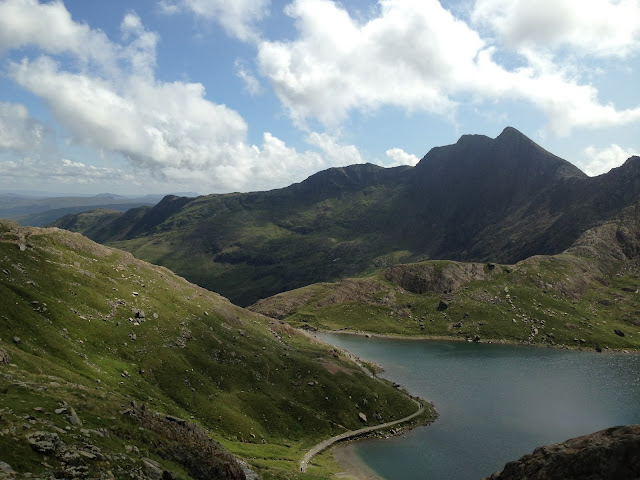 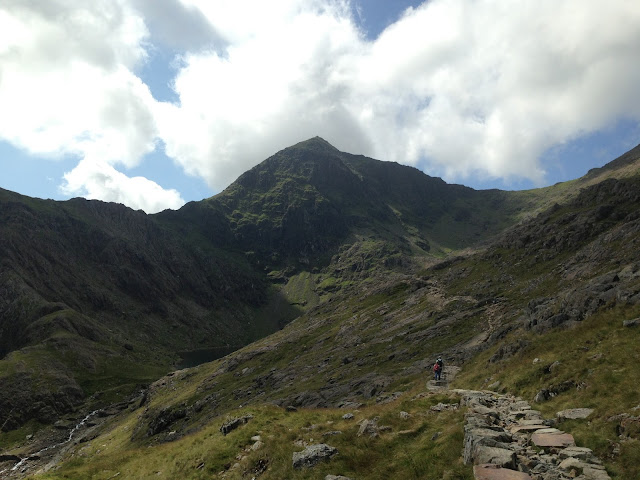 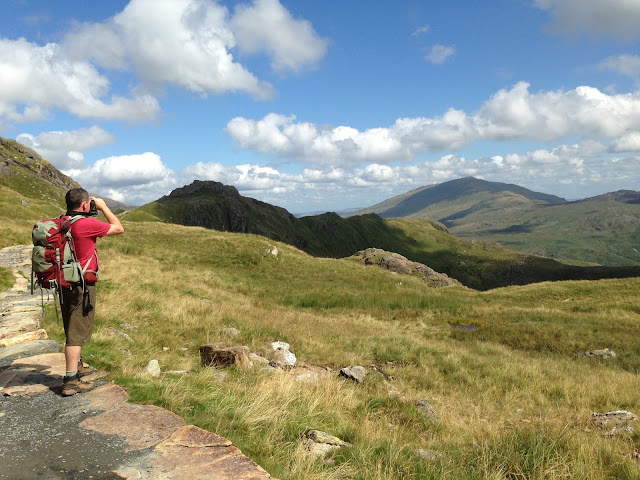 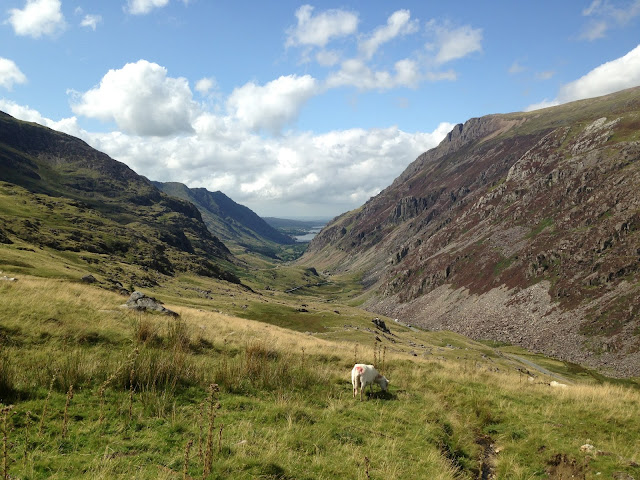 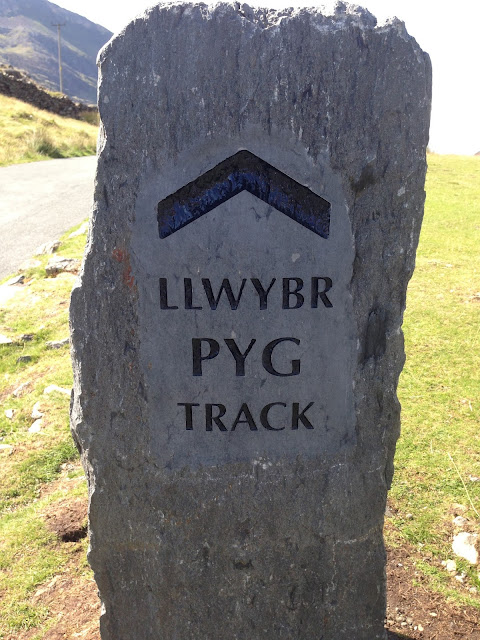 
Our final two days on holiday were spent in the Brecon Beacons at the Llwyn-y-Celyn youth hostel. Though not really birdy, we did manage a hike up Pen y Fan, possibly my favorite place on earth! Here we were greeted at the top by a pair of dancing, croaking Ravens...a great end to our amazing holiday in Wales!