March 21, 2012
The sound of Chiffchaffs singing on Friday prompted us to get out this weekend and see what's around. On Saturday Lori and I headed out to Oxfordshire to Otmoor RSPB Reserve. The weather started out drizzly but soon turned to torrential rain! Luckily, by the time we got to Oxfordshire the sun pushed through, so what we drove into was the beginning of a beautiful day. Otmoor, though lacking in facilities, such as restaurant, shop and toilet; did make up for this in wonderful surroundings.


Not far along the trail we noticed a feeder which had Greenfinch, Goldfinch, Lesser Redpoll and Reed Bunting all feeding at it. Our first good bird, looking across the wet meadows, was two Curlew; circling and calling. Further along we got a single Redshank on a small pool. At the main hide there was a good selection wildfowl to scan through plus our first Wheatear of the year; male and female.


At another blind which was located on the other side of the reserve we sat and watched Tufted Duck and Wigeon, until a squealing shattered the silence: Water Rail! Scanning the edge of the reeds we got two brief glimpses of this elusive bird showing its bright red bill. 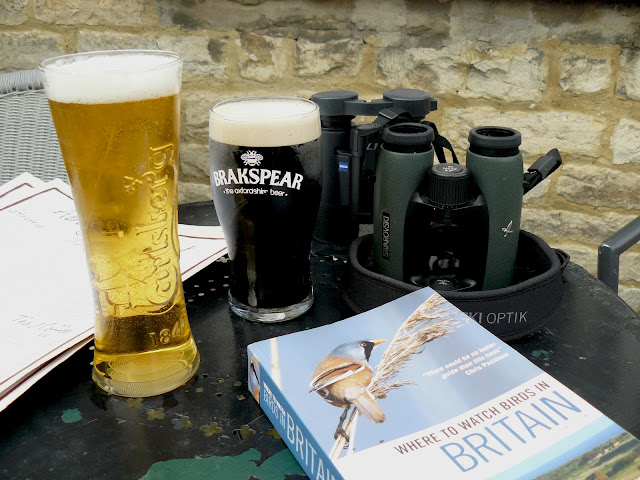 At about 1:30pm we decided to grab a bite to eat at the local pub; The Abingdon Arms. A great little pub with wonderful food. While enjoying a pint, Lori scanned through my 'Where to Watch Birds in Britain' book and found a really cool reservoir close to where we were. So, with full bellies we headed to Farmoor Reservoirs; close to the River Thames.

The reservoirs are divided by a long causeway which leads to a footpath and a hide close to the river. We didn't get time to check out the hide as we got a little distracted with a nice bird! We had only been there about 10 minutes when two birders came walking by and began chatting. They asked if I would look at a video they had taken to settle an argument they had been having! I got off lightly, it was clearly a Dunlin; which one of them was happy about and the other, well, not so much:) Anyhow, just as they were leaving they mentioned that a Little Gull had been seen in with about 300 Black-headed Gulls. My ears pricked up! Looking across at all the other gulls I didn't hold out too much hope. However, in my first scan I picked it up across the reservoir; its fast buoyant flight flashing slate black underwings: LITTLE GULL!!! This is only the second time I have seen this bird; the first at Staines, not long after returning from Canada. All four of us watched for about a minute before it decided to settle on the water, across the reservoir; and disappeared into the blur of Black-headed Gulls. A great end to the day. After a drive through Oxford town we headed home.
The following day we headed out on another excurtion; this time to Rainham Marshes in Essex. I had heard lots about this RSPB Reserve, and was happy to go take a look. Though it is set within an industrial area, and not necessarily the prettiest reserve, it certainly had some birds. Lots of dabbling ducks, geese, waders, egrets and more. We enjoyed our leisurely stroll around the circuit, with its impressive hides and great educational programmes. Bird of the day for me was Little Egret!