January 19, 2012
A bird that has been on my mind recently is the Hawfinch. It is a species that I have only seen in Russia whilst on a bird ringing trip in 1999. Having dipped on this bird at West Dean Woods two weeks ago, I was very happy to hear a couple had been reported at Bookham Common in Surrey. Though they are a big chunky finch, they are notoriously difficult to see, spending lots of time on the ground or high in a tree canopy. Add to this there shy demeanor and a recent decline in numbers; and what your left with is possible nemesis bird!

Luckily I didn't have to sweat on this one. After the morning showers had finished I headed out to Bookham. The earlier sighting reported the birds behind the Bookham Railway Station. I parked away from the station, because of the parking fee, and made my way across the bridge and on to the Common. It didn't take long to get my first look at a British Hawfinch!There were two birds, but I only ever got looks at one at a time. I stood around for about an hour and got four different sightings, from low in a bush to high in the canopy. I was a little pushed for time today, but want to go back for another look and spend some time birding the area as other cool species such a Lesser Spotted Woodpecker and Woodcock. 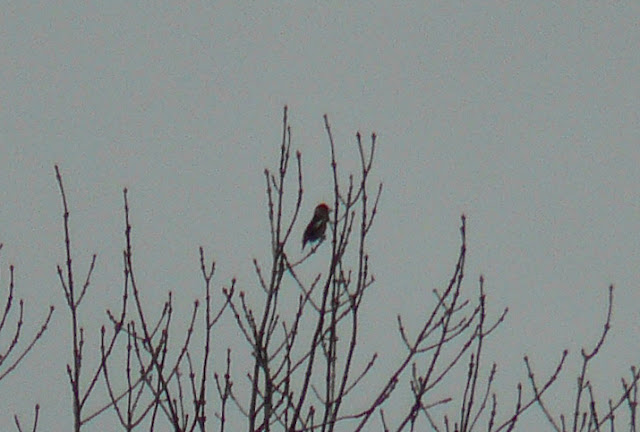