Happy New Year to you all! Time to catch up with the last few days of 2011 and some good birds. I couldn't have wished for a better end to the year! On the 28th of December our good friend Mike Force from British Columbia came and stayed with us for a few days. Mike had been visiting relatives in Gloucestershire but came down to see us for a visit before continuing with his holiday. We didn't waste much time and got out birding straight away. One of Mike's most wanted bird was Kingfisher, so after picking him up from Woking station we headed straight out with that in mind.

Our first stop was Wraysbury Pit near Staines where we got good views of most of the common diving ducks and common woodland birds. We then went over to Staines Reservoir where we added some more divers and grebes and Mike's first lifer: Water Pipit! After scanning both north and south bowl, which produced a distant look at Black-necked Grebe, we headed back to my local patch. Our first stop was at Papercourt Lake. Here Mike finally connected with his most wanted bird: KINGFISHER!

This individual was seen next to the stock pond where I have seen it on a few occasions. It stayed perched for about ten minutes and though we had great views, we didn't manage to get anymore than a record shot. The other bird of note at this location was Bullfinch. We then headed to Papercourt Meadow where we added Short-eared Owl, Stonechat, Meadow Pipit and a calling Tawny Owl....before heading down the pub:)

Today we headed northeast from Woking to Minsmere; the famous RSPB Reserve on the Suffolk coast. We departed home at 05:00 am and arrived at the reserve at 08:45 am, after a slight unplanned detour. We missed our exit! One of our first birds before leaving the car park was a gorgeous Red Kite! A good bird for Suffolk. Our first views from a Minsmere hide produced a bird that is as historically famous as the reserve itself: Avocet! 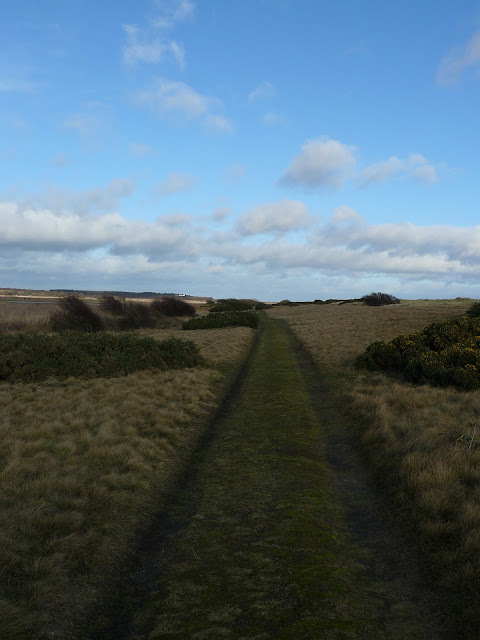 Following the trails along the the coast we discovered the small group (10) of Bean Geese (tundra) that have been present since November. These individuals were asleep when we arrived, though did wake after a while, giving us great looks. Other geese here included about 60 White-fronted Geese, Greylag Geese, Barnacle Geese (feral population) and finally my first look at a Bittern! The ocean was a little quiet though we did get a flyby Red-throated Diver.

After having our fill of scoping these amazing geese, we continued around the reserve; checking a few more hides where we got killer views of some very cool birds: Whooper Swan and Marsh Harrier! We had a great days birding and it was so much fun to finally visit this fantastic reserve with Mike.


Our last day birding together was at Pulborough Brooks in West Sussex. A Marsh Tit (lifer for us both) was the start of our day before leaving the parking lot. The reserve was fairly quiet and we enjoyed a leisurely stroll around the blinds and hides. Birds of note included Peregrine Falcon, Sparrowhawk, Bullfinch, Ruff and Snipe.

After chatting with one of the RSPB volunteers we decided to make a side trip to go see a flock of Bewick's Swan that winter in the water meadows near Arundal. On arrival in an area called Burpham we immediately spotted the swans, but only paused for a moment to look, as we also had information of a rarer bird further up the road. 1/2 mile further, at a great vantage point, we bumped into some birders. They were indeed looking at something a little rarer: an immature Rough-legged Buzzard! A British tick for both Mike and I. We chatted for a while and added a few more species including Corn Bunting (50), Grey Partridge (4), Red-legged Partridge (10), Common Buzzard (2), Kestrel (1), Red Kite (1), and Reed Bunting (2). Heading back down the hill me noticed that all the Bewick's Swans were gone! On closer inspection we found out why. Unfortunately there were about ten people with dogs and guns close to where the swans had been feeding. This fact, plus the heavens opening prompted us to call it a day head home...


Over these few days we covered a lot of ground and got to see some really cool birds (95) and even snagged a few lifers too! We ended our trip down the New Inn pub, where Mike kindly treated Lori and I to a nice meal and a couple of pints!