November 19, 2011
Both the weather and birds this weekend have been a little strange to say the least. Saturday was blue skies all day long, but Sunday was the foggiest day I have seen in a long time. From the moment I set out to when I got home, the visibility was atrocious. On Saturday morning Lori and I took a walk around Papercourt Lake and a stroll up the river. Papercourt held most of the usual suspects including Tufted Duck, Egyptian Goose (5), Pochard (Lori's lifer), Mallard, Mute Swan, Great Crested Grebe and Little Grebe. Two species of gull were present: Black-headed Gull and 5 Common Gull. In between the stock pond and the main lake we found 3 Bullfinch; a new bird for my local patch.

Our walk along the river off Tannery Lane was fairly quiet, though we did find a group of Fieldfare and Redwing feeding on holly berries. Though both species were very vocal, they decided to play hide and seek with me and for the most part skulked in the back of the trees, only showing themselves for a split second. However, I did manage one photo of a Redwing. After returning home and dealing with some chores, I headed back out as I had just heard of 2 Short-eared Owls showing on Papercourt Meadows! I arrived on site at about 14:20 where I bumped into some local birders. I introduced myself and got chatting to Andy Wilson. Andy explained to me that the birds had been seen for the last few days (I hadn't been checking the Surrey Bird Forum; tut tut) and had been showing any time after 14:30. Perfect! Only a ten minute wait...

An hour later we were still stood around waiting with no sign of any owls. By this time many more people had arrived; there were small groups split over the whole area, probably close to 30 individuals. We passed the time by chatting about the local area, which was great, as I learned about some good places to check. Four more birders joined us, including 'Eddy' (Simon Edwards) while we continued our vigil. While waiting we noted a few birds including 3 Stonechat, Kingfisher, Kestrel and Meadow Pipit. The chatting came to an end when the resident Barn Owl made an appearance; quartering the meadows to our right. Though very visible with our bins, the light and distance were too great for photos. One of the lads suggested that this was just the warm up; the main event was still to come! At approximately 16:00 2 SHORT-EARED OWLS appeared! 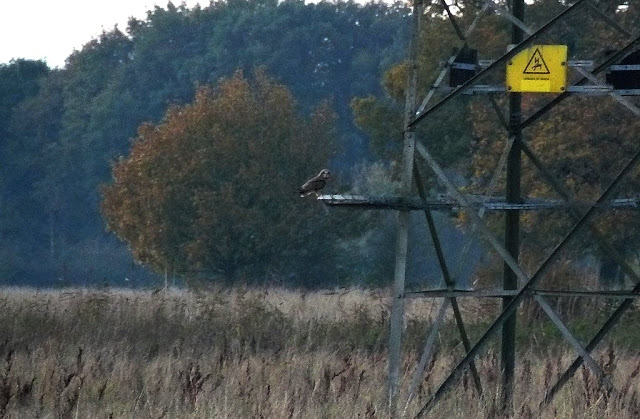 The 1 1/2 hour wait was immediately forgotten as we watched these buoyant and graceful hunters work their way across the meadows. Thanks to both Andy and Eddie for your company and the other lads who joined us.

So, to summarise; I added three new species to my local patch: Bullfinch, Barn Owl and Short-eared Owl. With the foggy start (and finish) to Sunday, I was being a little optimistic wishing to add anything else to my patch list...luckily my optimism paid off. In the morning a visit to Carters Lane paid off with two new species added: a female Shoveler at the sewage ponds and a much needed Coal Tit along by the golf course. I did a quick check back at Papercourt Meadows at 14:00. At 14:20 I got two very brief views of one Short-eared Owl and a calling Little Owl.

*note: on the 21st November 2011 Lori and I went back to see the owls as Lori had not seen Short-eared Owl in the UK. We had a great afternoon and got FOUR species of owl. 2 Short-eared Owl, 2 Barn Owl, 1 Tawny Owl and 1 Little Owl! Amazing!! Lori bagged 3 new species for Britain: SHORT-EARED OWL, BARN OWL and STONECHAT!