Today my wife Lori and I headed south from Woking to Pulburough RSPB Reserve; set in the Arun Valley, West Sussex. The hour drive went quickly as we traveled down the A283, enjoying the scenic views and quaint villages along the way. Just twenty minutes prior to our arrival, the skies turned black and the rain began. This was a blessing in disguise, though we didn't realize it at the time. After parking up and getting our rain gear on we headed inside to the visitor centre. Here, we paid for an annual family subscription to the RSPB and a new rain jacket for Lori. It stopped raining. The reserve has a wonderful loop trail with four hides and two look out points. In between these, the trail takes you past fields, ponds and woodland. 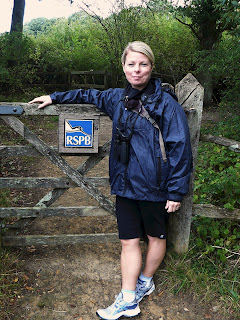 As this was Lori's first official week back in the UK, there was going to be plenty of new birds to see. As we approached the first hide we stopped to watch a flock of tits feeding in some bushes, set within the woodland. Great Tit, Blue Tit and Long-tailed Tit made up the party. A Chiffchaff was calling from the canopy and a Spotted Flycatcher was snatching insects, using various snags to launch its attack. Not a bad start! Though we were enjoying these woodland birds, we were soon distracted by the sounds coming from the muddy scrape around the corner.


At Jupp's View, an open view point close to the first hide, we looked across a shallow lake and fields. Greylag Geese were abundant, as were Wigeon, Mallard and Canada Geese. After settling in, we began to pick out more species. Lapwing were tucked along the grass verges; with a few flying across the water. On the mudflats there were Ruff and Dunlin, busily probing in the shallows. Along the grass fringes were Common Teal, but after a second scan, four Snipe materialized; exposing there long bills, previously buried in the mud. Lori pointed out an interesting wader which had just appeared; Little Ringed Plover! There was so much coming and going of birds that we could have stayed there all day. We didn't have all day but we did scan one more time. In the middle of this shallow lake was a grassy island with a muddy point. I began to scrutinise the waders on that muddy point, they looked different. Unfortunately they were roosting, with their heads tucked. Luckily, something must of triggered them to move around. The first bird gave its identity up immediately, with its patchy and blotchy red patterned breast and belly: CURLEW SANDPIPER!


Curlew Sandpiper has been very much on my radar but did not expect it today. We spotted 5 individuals just before a Sparrowhawk came screaming through, scattering birds in all directions. We spent about half hour in Nettley's Hide but couldn't relocate the birds. Our next stop was at Hanger View where we bumped into two RSPB volunteers. They also confirmed seeing Curlew Sandpiper, though from there vantage point counted 14 individuals, the other nine were hidden behind the island. This was largest group of these birds recorded at the site on one day. All pushed down to the reserve because of the rain! Further along we stopped at Redstart corner. Ironically, two Redstarts had been reported from this area and on arrival we found two Redstarts! Both birds were perched on a barbwire fence; flying to the ground and snatching flies. 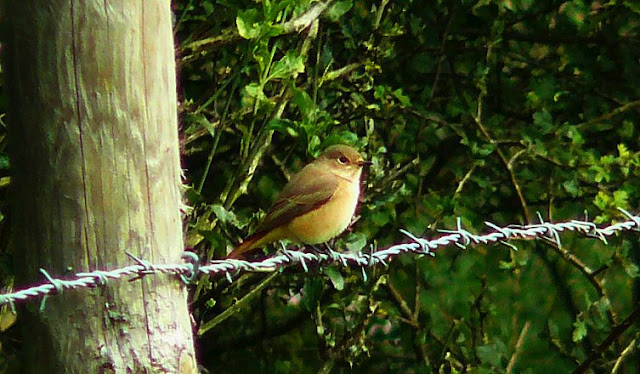 We finished our day with 48 species seen; 19 lifers for Lori and 1 for me: CURLEW SANDPIPER!