July 05, 2011
Having lots of time on my hands at the moment, I took the opportunity to take Nolan and my nephew Ryder down to Buttertubs Marsh in Nanaimo. Ryder, who is five years old has taken a real interest in learning about birds and nature, so it was extra special to be able to show him some new birds. When we arrived at the marsh we got to see some Wood Duck from the first viewing tower.

After scanning the marsh we followed the trail seeing American Robin, Tree Swallow and Bushtit. We also heard Yellow Warbler and Marsh Wren singing. As we walked Nolan and I told Ryder that when you get to see a new bird, a bird you haven't ever seen before, we call it a lifer! Anyhow, we followed the trail and Ryder suggested sitting on the bench to listen for birds as it is easier to hear them. We were only sat down a few seconds when I could hear young birds begging for food. We walked around the corner and looked up to see a nest of Cedar Waxwing being fed by both parents! It was absolutely fantastic to see these cracking exotic looking birds at the nest! Both Ryder and Nolan (and ME) were very excited and we watched as both parents arrived with food, feeding their fledging young. There were three birds in the nest and one had already branched out. 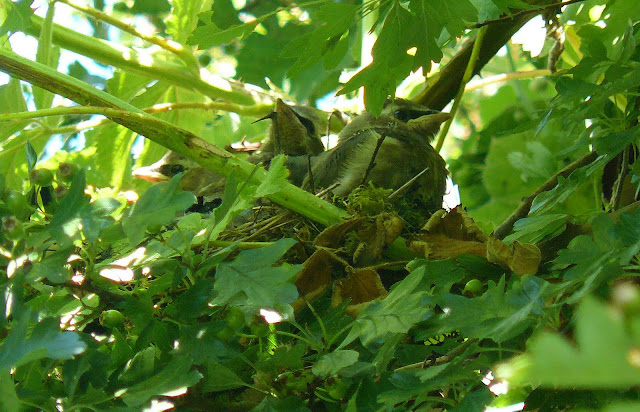 At one point Ryder started jumping up and down and saying "I JUST GOT LIFED!!!" Nolan and I thought that was awesome and I think Ryder may have just invented a new slang term for the birding world! Click on the link:   I just got LIFED!


We really did get lucky on this discovery as within ten minutes all four young completely fledged and flew with the adults to the other side of the marsh. Continuing on we found Brown-headed Cowbird, a family of Bushtit, Chestnut-backed Chickadee and Song Sparrow. We ended our day with an ice cold slushy form the local store....I believe Ryder got LIFED about 10 times today:)