December 11, 2010
This morning I headed out on foot from our home in Parksville. Lori and Nolan were visiting our friend in Victoria which left me without transport. No matter, I managed to go birding on my bicycle all last year, so a stroll to the park shouldn't be a big deal. The gray clouds seemed ominous but the rain didn't hinder my plans, though it did begin to drizzle after about four hours. My first good bird of the day was a Cackling Goose which was hanging out with a few resident Canada Geese in the fields behind our home. Five minutes later I was entering Parksville Community Park where I was welcomed by a foraging Varied Thrush. In the bay was a good close group of Surf Scoter including a few Black and White-winged Scoter. Further out were Horned Grebe, Barrow's Goldeneye, Common Goldeneye and Common Loon. I followed the shoreline to the end of the park, hoping for a Snow Bunting, though all I got was Song and White-crowned Sparrow. The sand spit just offshore was loaded with shorebirds: Dunlin, Black-bellied Plover and Black Turnstone, which is fairly common, though big a group of Pacific Black Brant was a surprise! I approximated that there were about 48 individuals though the ocean and distance were not on my side. I phoned Guy Monty to inform of this group. Guy is a local biologist and has been monitoring Pacific Black Brant for many years. Guy had seen a group of 18 recently but was very happy to hear there were more birds. He made his way down to the park but the geese flew way offshore by the time he arrived. We chatted for a while until we spotted a small group of brant on another sand spit. There were 10 individuals with another 6 arriving ten minutes later. After scrutinizing the birds for a while Guy managed to read two leg bands; a great December record.

As we both had some spare time we headed down to Schooner Cover to check out a Yellow-billed Loon that been hanging out at the marina. On arrival there was two Bufflehead, a Red-breasted Merganser, Common loon and a very cold Mike Ashbee. Mike had been there for the last two hours with no sign of the bird. We stood around chatting and catching up for about twenty minutes until the bird materialized in front of us. In between dives, we probably got to see the bird for about ten minutes, until it disappeared as quickly as it had arrived. We waited around for about another hour with just one re-sighting out in the straight. 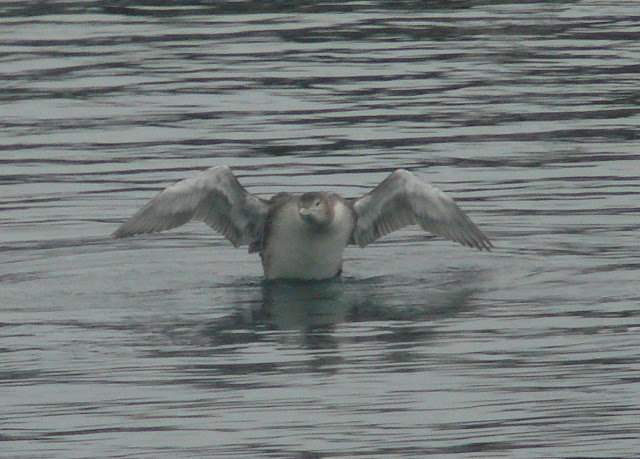