December 28, 2010
Today's excursion was completely random. I had no particular itinerary, other than the fact that I was going birding. My day started at Rathtrevor Beach in Parksville as Lori wanted to go jogging. I scanned the ocean and though the elements were perfect, there was a serious lack of birds. A few Barrow's Goldeneye and Harlequin Duck kept me content while I waited for Lori to finish her workout. After dropping Lori home, I headed north to Deep Bay. I checked the first beach access where I scanned through all the sea-ducks. Nothing unusual, but, as always, I am impressed with the close-up views you get at this location: Black Scoter, White-winged Scoter, Surf Scoter, Long-tailed Duck, Common Goldeneye, Bufflehead,  Harlequin Duck, Red-necked Grebe, Horned Grebe, Common Loon, Pelagic Cormorant, Double-crested Cormorant. 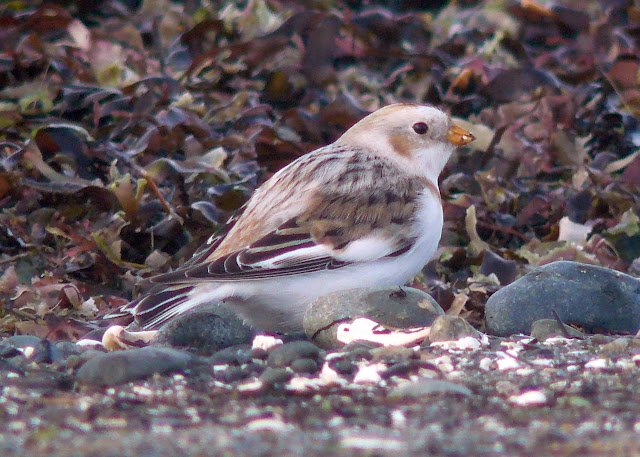 Next I headed down to the point where I bumped into John Purves. Our paths have crossed over the years, mainly at Christmas Bird Counts, but I had never spent any time with John. We decided to join forces and made our way through the long grass to the sandy shore; while Golden-crowned, White-crowned and Song Sparrow watched us with a suspicious eye from the sanctuary of their small bushes. While we chatted, John informed me that a Snow Bunting had been recently reported from this spot. This species has been avoiding me ever since coming to Vancouver Island, so I was very happy to hear that news. We got ourselves comfortable and scanned the shore and rocks for any sign of this northern beauty. After about half an hour we decided to walk along the shoreline and found the bird! It was feeding in some short grass and quite hidden but soon made its way onto the sandy shore, feeding on small seeds in the seaweed and debris. We were both thrilled to get great views of a bird that was a first for us both on Vancouver Island: Snow Bunting! We stood around for some time enjoying this specialty from the tundra and managed to get a few photos. After about twenty minutes the bird made its way around to the rocks until it finally disappeared behind some boulders. 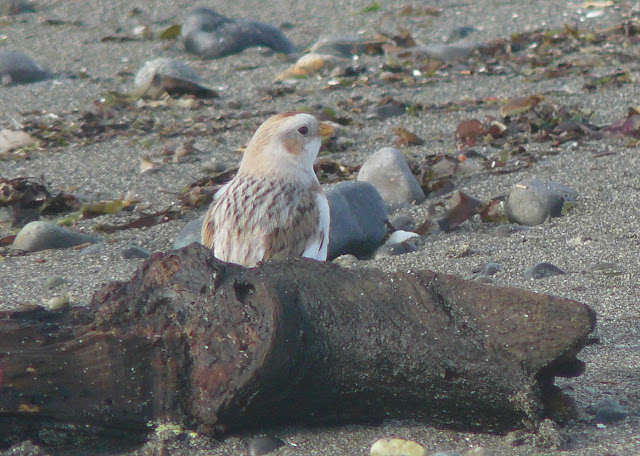