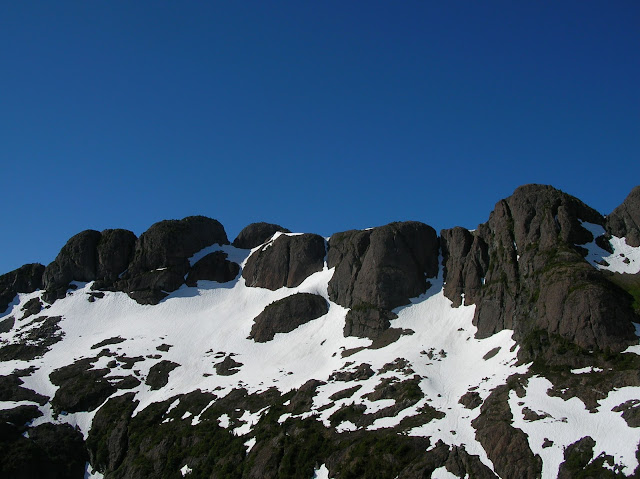 While carrying out breeding evidence surveys for the British Columbia Breeding Bird Atlas on Mount Arrowsmith, my brother-in-law, Justin Lynch and I discovered a family group of Gray-crowned Rosy-Finch. We ascended Mount Arrowsmith, beggining at the trail located on the main Cameron logging road at 7:00 .am. After reaching the saddle, we descended to Emerald Lake, which was still frozen and then continued up the north side. We then followed a route around the bowl, which surrounded the lake to a snow bridge, then back to the saddle. It took approximately seven hours, including the time to return to our vehicle. 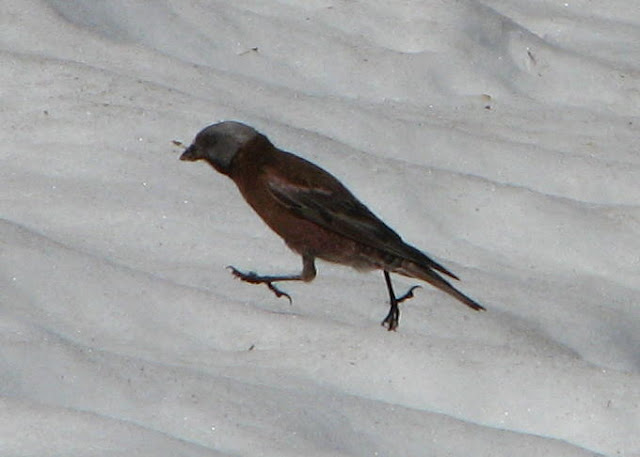 Our main goal was to locate and confirm breeding evidence of White-tailed Ptarmigan in the area. Unfortunately we were unable to locate any. We did, however, find a group of Gray-crowned Rosy-Finch. Our first indication was from a vocalization I wasn’t familiar with. We were about half way around the lake when I heard a ‘finch like’ call! I looked up and followed a bird down to where it landed on a rock. Though the bird was backlit and about 60ft away I did pick up on some field marks and called, “Rosy-Finch!” The bird then flew, which was frustrating but luck was on our side and we followed the bird to the edge of some snow, to find an adult male and two juveniles! Within about 2 minutes we confirmed two juveniles, two males and one female. They were all feeding on some small seeds, probably blown off the hills that were scattered on the snow. It was a very exciting encounter and new North American species for me, as well as the first documented confirmation of the species breeding in the area.