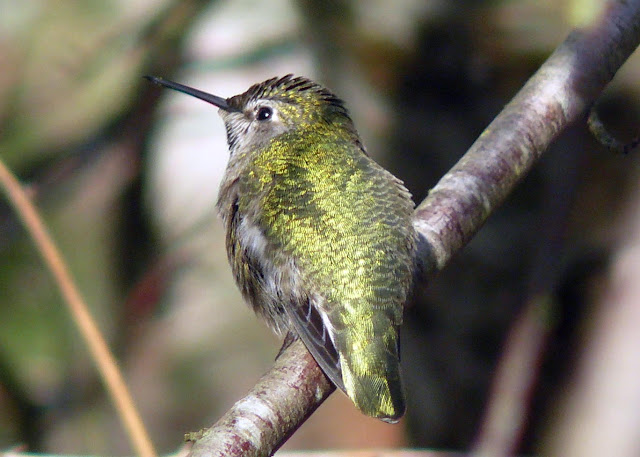 Another attempt to locate a Common Redpoll produced my usual result: zero! I spent an hour underneath some Birch and Alder trees, willing a Redpoll to miraculously appear in the mix of Pine Siskins that were feeding above me. Alas none materialized. Dark-eyed Junco, Song Sparrow, Golden-crowned Sparrow, Spotted Towhee, Belted Kingfisher, Northern Shrike and an adult female Cooper's Hawk kept me company during my vigil. I followed the path at the bottom of Mills Road to Shelly Road where more Pine Siskins were feeding but much higher up in the canopy. Whilst scanning through these birds an adult male Anna's Hummingbird landed in front of me. It only stayed for a few seconds then vanished, a minute later I noticed another Anna's Hummingbird tucked up in some brambles. This local area produced 5 individual Anna's Hummingbird on the Christmas Bird Count this year.