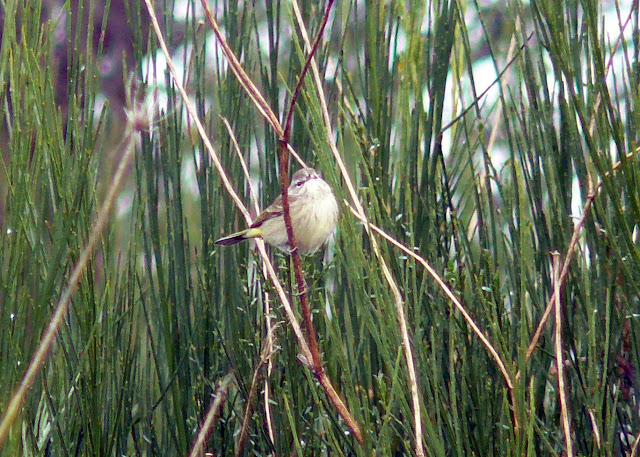 The night before I headed out to The Sunshine Coast with Mike Ashbee, I heard about a possible Palm Warbler at Nanaimo River Estuary. Though it was very tempting to chase this bird I had already made plans with Mike to go look for Rock Sandpiper. Luckily, Guy Monty was able to go and see if he could relocate the bird, which he did and confirmed that it was a Palm Warbler. Guy had received a call from Jon Carter, who has just moved to the island from the UK, and who’s suspicions were correct about this bird. Nice find Jon! England’s loss is our gain!  I got back from the Sunshine Coast trip Saturday night and read Guy's report and decided I would try for the bird Sunday morning. Leaving Parksville at 7:45 a.m. got me to Nanaimo River Estuary at about 8:30 a.m. It was raining hard on the way there, though it lightened up a little once I arrived.
The area where the bird was originally seen was opposite a big Oak tree. So, I checked that area first, then checked the low shrubs close by, then the hedgerow. No luck. I headed over to the viewing stand, as there was a lot of bird activity, but still no sign of the warbler. It was then, I noticed a vehicle pulled into the parking lot; it was Mike Ashbee, who had decided to also look for the bird. I was on my way back to the oak tree to meet with Mike when I spotted the Palm Warbler! It was sitting just in front of the oak on a small snag next to a bush. I immediately indicated to Mike that I could see the bird and he promptly came forward. The bird flew into a weedy patch on the other side of the path and began to feed. We followed this rare, but annual, warbler for about ten minutes until it flew back over the path and disappeared into some thicker bushes. We stood around chatting for about an hour but did not see it again. 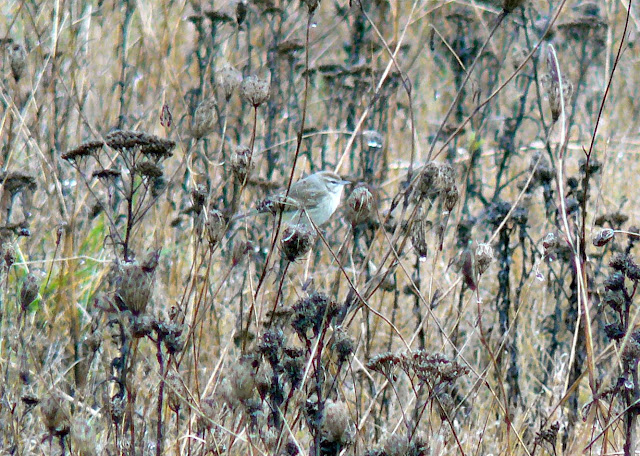 There was plenty to keep us occupied though; a Short-eared Owl flew over the top of us, being mobbed by Northwestern Crows. A few minutes later, the crows began harassing a Northern Harrier and drove it out of the estuary. A Lincoln’s Sparrow put in an appearance then a Northern Shrike. By then it was time for me to get going so Mike walked back to the car with me and we both noticed a group of Western Meadowlark flying across a field. Before I left, three more birders turned up and Mike stuck around to help them relocate the warbler. Though this bird should be wintering down near Florida it sure made my day!