The weather in November was atrocious, with rain practically every day. But the birds have been unbelievable! I had hoped for maybe two or three new species for the NMT challenge; I got double, including an island bird and a MEGA North American rarity!
November started off with two days of riding around the Englishman River Estuary and Rathtrevor Beach. I only travelled about 18 kilometres but added two new birds: Ancient Murrelet and an adult Long-tailed Jaeger, a huge surprise!
On the 11th November 2009, Guy Monty and I rode out to Schooner Cove, Nanoose, in search of shorebirds. The ride was a real up hill slog and though I added another bird, Surfbird, we were both a little peeved as we saw what can only be described as a possible Rock Sandpiper. We couldn't make out any field marks because of the long distance and
poor light. This bird was with a group of 20 Surfbird and 4 Black Turnstone. It was small and had a hard time keeping up with the main group. These shorebirds flew across the ocean in front of us, after losing the sanctuary of distant rocks to the high tide. It was almost definitely a Rock Sandpiper, but it could have also been a similar looking Dunlin. We will never know. Though we were choked to say the least, we just couldn't add such a stringy bird.
The next trip that Guy and I made on our bikes made a ride to Nanoose look like a picnic. Our day started at 07:30 a.m. on a dark and rainy morning in Parksville. Our mission; to ride our bikes to Port Alberni, in search of Canvasback, Redhead and Swamp Sparrow. It was a long 69 kilometrer ride over the hump. As the rain kept coming and my legs began to burn, I started to regret travelling this road again. Luckily, as we reached the highest point the weather broke and blue skies lifted our spirits. The ride down to port only took twenty minutes and after some refreshments we headed for the Somass Estuary. The sewage lagoons at the estuary were barren, with only a few dabblers and some Mew Gulls to sort through. We did, however, add Swamp Sparrow, which was calling from the reeds next to the pipeline. 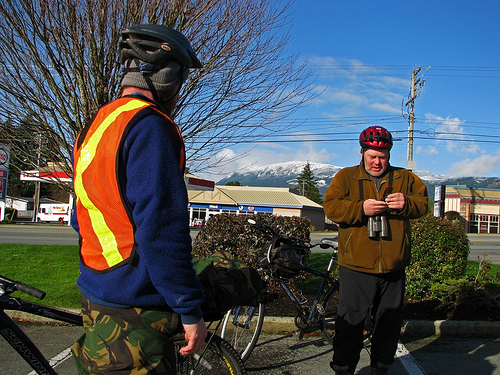 While making our way to the inlet, Guy was convinced he heard a strange goose call. A little later, we both heard the goose but were unable to locate it, so we carried on. The third time the bird called, it sounded much closer; we both looked around to see where it was? It was flying directly over us. First impression was that it was a Great White-fronted Goose. Second impression was a whole other story! We both raised our binoculars and it was immediately evident that it WAS NOT a Greater White-fronted Goose. I watched slack-jawed, staring at the head, noting the black bill with orange/yellow near the tip, the neck was long, "what the hell?"
The words “BEAN GOOSE!!” ricocheted through my head and body. Guy was screaming….”BEAN GOOSE!!!
Other than Attu, there are only three records for this species in North America that I know of: April 1993-Bowerman Basin, Grays Harbor County, Washington. October 1999-Whitehorse Airport, Whitehorse, Yukon and December 2002-Hoquiam, Grays Harbor County, Washington.
Guy managed to snap one photo but the bird was half way across the estuary and then gone. A rare bird report will be submitted to a provincial committee when one has been formed. At the inlet we were losing light and time but we did add one more bird for us both; Canvasback.