This month I managed to almost double the kilometres that I had ridden in January, which included my first attempt at a much longer ride. The month started off well, with four Pine Grosbeak! I was driving home from work on the 4th, when I spotted them on Despard Avenue in Parksville. Being only two minutes away from home I phoned Lori and asked her to get my bike out, quick! A fast turn around in the driveway and Lori, Nolan and I were heading back together. We got to them just as they took off from a tree beside the road. No matter, the birds had been seen.
Next was a 19 kilometre ride in my local area as a warm up for my first long jaunt. On the 14th February, I headed out to south Nanaimo, a 57 kilometre trip. I added three new species before getting to Nanaimo River Estuary, where I intended to finish. I walked the estuary for an hour and just as I was going to throw the towel in on the day, a Short-eared Owl floated over one of the river channels. This injected some fuel into my bones, and I made a phone call home to let Lori know I was going to try riding a little further. Two minutes later, I bumped into fellow birder Bernard Schroeder, who informed me that there was a Pied-billed Grebe in the river channel. The grebe was in the bag and number 100 for the NMT year. I peddled my way through the back roads of south Nanaimo, ending up at Morden Road. It was here I began to look for a reported rare owl. It was quiet, then out of the blue, the American Robins started making a racket. I looked above me and there on a snag, sat my target bird: a Northern Hawk Owl! Having seen and photographed this northern rarity, I promptly collapsed and Lori drove out to pick me up. 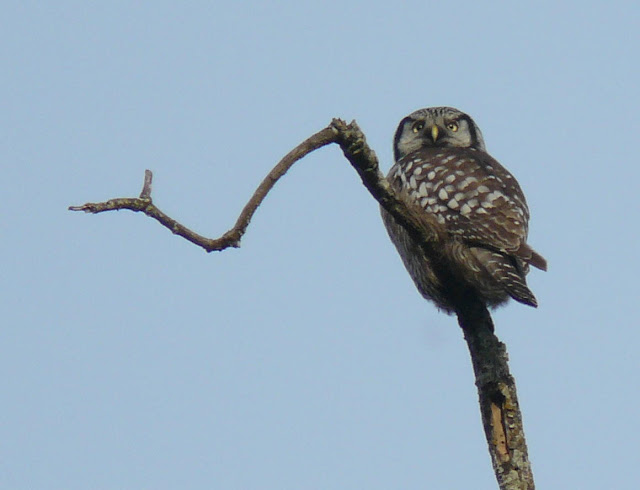 The following day, Lori and I headed out on a ride to some local fields where we added American Kestrel, Wilson’s Snipe, Hutton’s Vireo and Northern Pygmy-Owl. A few days later, Guy Monty phoned me with an address in Parksville where I could find an Anna’s Hummingbird at a feeder; and I did. This was a great relief; though they are not rare, they are seldom seen in this area. My last real attempt this month was on the 21st when I added seven new species in and around Parksville. Best of all was a Gyr Falcon at Parksville Community Park.