November 23, 2008
On the 18th of November Jukka Jantunen found and reported an adult Black-tailed Gull in winter plumage on the mudflats at the south end of the Courtenay Airpark. This rare gull was photographed and Derrek Marvyn, a moderator for the Vancouver Island Bird Alert, was informed, and subsequently posted the sighting. Black-tailed Gull breed and winter around Korea, Japan and China and have only been reported twice in British Columbia. This new record is the first documented and ‘confirmed’ record for BC.
The following day many birders including Guy Monty, owner and moderator of Vancouver Island Bird Alert, headed up Island in search of the rare asian gull. I was working and was unable to chase this bird. I was irritated all day, wishing I could have gone, and waiting for news. The bad news was that it failed to show up again at the mudflats, despite many good birders searching all day long. The good news, though a little frustrating for the birders who were up in Courtenay, was that local birder Christopher Stevens had found the bird at Parksville Community Park in Parksville. Christopher, 15 years old then, recorded the bird, noting all the field marks and managed to get a record shot on his camera. Guy Monty returned home to a barrage of frantic phone messages.
The following day, Thursday November 20th, birders from all over the island, including people from the mainland moved into the community park en-masse to relocate the bird. This is possibly and probably the only opportunity to ever see this amazing, and very rare gull in BC and everyone was well aware that if they missed this bird it could be their last chance!

I stopped at the park briefly en-route to a job in Nanaimo, but the bird had not been seen. That evening I learned that there were two reports from birders saying that they had seen the bird, briefly, across the ocean. The saga continued the following day with no sightings reported. On Saturday 22nd I joined Guy Monty for another search in the Parksville area.
After a few hours searching, we decided to head along the coast to Union Bay. If nothing else it is a nice place to hang out. We didn’t find the gull, but enjoyed scanning through the many Dunlin, Black-bellied Plover and Black Turnstone until we finally found a Ruddy Turnstone! Nice bonus bird and only the second I had seen on Vancouver Island.
Saturday evening I received a phone call from Guy. He had just heard from Jukka who had relocated the bird again at Kye Bay in Comox late Saturday afternoon. We agreed that we should go the following morning. The word went out on the bird alert, again.
Sunday morning we met with some local and not so local birders at Kye bay, and no one had seen the bird. We all decided that we should divide up into teams to cover as much ground as possible. We swapped cell phone numbers so that if anyone found the gull we would call each other with the scoop. Guy and I headed out and, luckily, Guy new the area very well so we checked all possible areas that would be good for gulls. 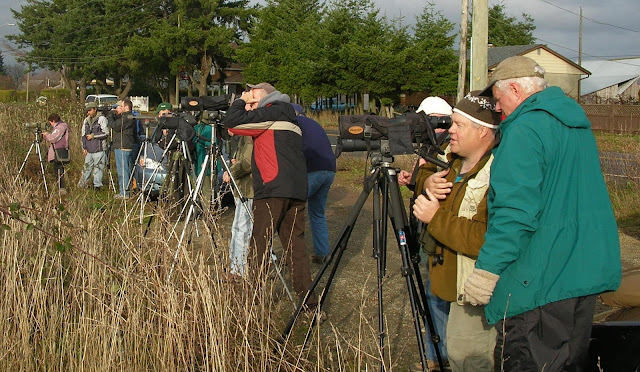 It was about 10:00 a.m. when we stopped near Courtenay Air Park. We parked next to Portuguese Joe’s, a fish market, and set up our scopes to scan the bay. There were lots of gulls including California and Ring-billed gulls preening, and bathing out in front of us. We had only been there a few minutes when I focused on a gull that immediately stood out. This individual had a darker back than the other gulls, seemed to have a different shape and appeared to sit higher in the water. The bill was straight with a dark red tip. “Guy, I think I have the bird, look!” Guy looked into my scope and I watched carefully to see his reaction.
He turned and looked at me, he nodded; “That’s the bird”! It was said in a very calm but deliberate way. More like a tremor really. I knew he wanted this bird bad. We both really wanted this bird! I missed it in 2004 when one showed up at Midway Beach, Washington. I was living in The Okanagan Valley at the time, and four of us headed south to see this rare gull. We missed it of course but it was my first trip to Washington so Heermann’s Gulls, Wandering Tattlers, Surfbirds and godwits kept a big smile on my face.
Guy took two steps over to his scope and focused on the bird. I leaned in and looked through mine again. There was a pause and the relief was silent for a few seconds! With both of us staring at the bird it lifted its wings then, fanned its tail. It had a deep black band with a pearl like fringe. It was incredible! I looked over at Guy; the look on his face was priceless. Pure joy. Then came the shouting and jumping up and down! 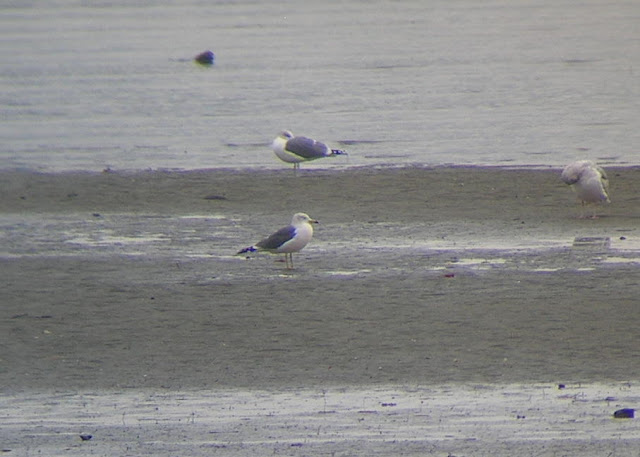 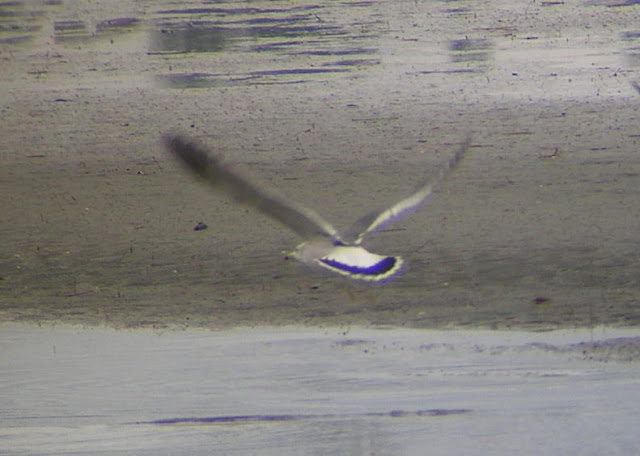 After a few short, and very ‘graphically descriptive’ words about this asian beauty, we got a grip of ourselves. We had to start calling people. Guy got on the phone and I got back on the bird. I couldn’t see it. I started to sweat. This bird had shown itself and disappeared. This can’t happen again? Where is it? While scanning I could hear that Guy had already called three people, who had in turn called another three people, and then the first car pulled in next to us. Doors’ flying open, excited and desperate looks on each of their faces. Guy looked over at me and my look said it all; the bird was nowhere to be seen.
We started looking and more people arrived, setting up scopes, asking the same question. “Where’s the bird?”  There were twelve birders lined up and more arriving. There animated looks were turning to frustrated looks and even cynical. I had taken one photo, which I quickly looked at and at least you could tell it was the gull. I scanned again. Minutes passed when Guy shouted that he had spotted the bird; it was on the other side of the bay. Everyone got on the bird, and as it seemed content and undisturbed, we all jumped in our cars and drove around to get a better look. The gull flew around a few times putting on a dazzling display much to the delight of a very captivated audience. This bird, this Black-tailed Gull, is the first confirmed and documented record of this species in British Columbia. It is also Guy Monty’s 400th British Columbian species. Congratulations to Guy and a big thanks to Jukka Januten who found, identified and reported this bird. 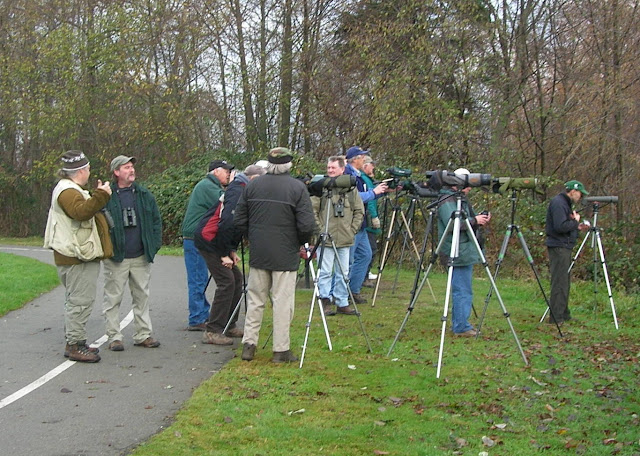