October 18, 2008
"There is a ghost, so the legend goes, that lives high in the misty mountains, a phantom that lurks in the shadows and hollows of the alpine rocks.  It resides there to haunt our dreams and devour our souls." -Rich Mooney 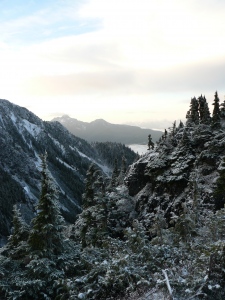 Following two failed attempts at finding White-tailed Ptarmigan on Mount Arrowsmith, it was time to change the approach. After researching local day trips that might produce a ptarmigan, it was decided that Mount Cain was the best bet. My brother in-law Justin Lynch, who is a seasoned alpine hiker, agreed to join me in my futile quest once again. Our day started at 04:00 a.m. when we pulled out of my driveway and headed north. Justin had stayed the night, which afforded us another half hour of sleep that morning. The reason for our early departure was that Mount Cain is located near Woss, which is a 3-½ hour drive from my home in Parksville.
We took the main logging road westbound off the Highway 19 and arrived at the ski lodge at 7:30 a.m.  Mount Cain is situated inside of Schoen Lake Regional Park.  At its base the mountain’s elevation is 1,311 m / 4,301 ft. and at the summit 1,768 m / 5,800 ft.  We prepared our bags and gear and began the ascent along the main trail. Within a short period of time I began to feel the climb and wondered, “What have I got myself into again?”
The hardest part was, actually, hiking up the first ski run and seeing how far we still had to go! Shortly we reached a switchback road that was not only more interesting, it was also remarkably easier on our legs. Once we reached the alpine proper, the scenery and habitat was a welcomed distraction, and I forgot all about my aches and pains.  After a short break we began making our way across a huge boulder field that was covered with a light dusting of snow. Once we were across, we had a better vantage point and could then think about coming up with some kind of plan to maximize our time and effort. We were basically at the bottom of a huge bowl with Mount Cain in front of us, and to the right, Mount Able.
We skirted the bottom of Mount Able and followed an imaginary line midway up toward Mount Cain. At different times we split up to take higher and lower paths to cover more ground. The terrain was fascinating but difficult to negotiate, as we were either scrambling over boulders or walking along the screed, always leaning to one side to compensate for the angle of the ground. We made regular stops and though I felt absolutely fine, my feet were beginning to get really cold in my inadequate footwear.  Luckily the weather was mild and it was more of a discomfort than a problem.
It took about an hour before we were at the approximate centre of Mount Cain, where the alpine rocks connected with some trees. We continued ascending again and within ten minutes Justin said, “Hey, this is interesting!”  He pointed downward to a fallen tree, which lay in front of us. This snow-covered tree was one of the most exciting things I had ever seen! There were footprints. Ptarmigan footprints! We scanned the immediate vicinity with trepidation and in a small opening through the trees was a plateau, absolutely covered in tracks and they were fresh! 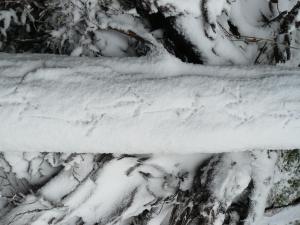 Though I rarely use tape callback, in this instance I did.  And then, like music to my ears; keeek…keeeek…keeeeeeeeerk, boomed from our left and below our position! Justin and I froze; a few seconds passed and my jaw finally began to close.
We both agreed that the sound came from below us but we needed to maneuver ourselves through some small trees to be able to look down a huge steep slope. Once in position we heard the bird call again and we were, definitely, looking in the right area. I scanned with my binoculars slowly and precisely, looking for any kind of lump, when I noticed a plump rounded shape. I steadied myself and stared so hard that my eyes began to water. I had subconsciously stopped breathing and began to notice the pumping in my chest. My elbows were locked in tight and I adjusted my feet to compensate for the loose and crumbly rock beneath my feet, and like magic, a White-tailed Ptarmigan materialized. I could see the beak, the eye and then in moved! “Got it!”
I quickly passed the binoculars over to Justin who focused on the mumbled directions I gave;I knew he was on the bird when his expression changed from puzzlement to exhilaration. “Wait”, he said, “there’s three!” I looked again and tucked in by some vegetation were two more Ptarmigan. We hurriedly but cautiously moved down the slope to attain a better position to observe them. As we did a fourth bird flew by us, which had been hidden about forty feet above where we had been standing. Using some of the small trees as cover we descended to within thirty feet of the birds. 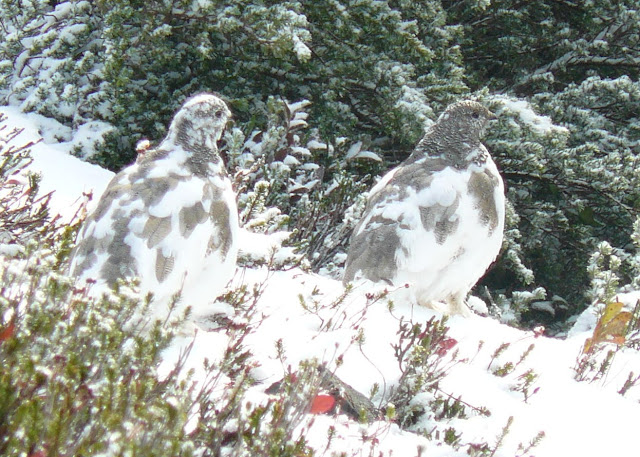 The Ptarmigan were obviously aware of us but seemed content at the distance we were keeping. For the next forty minutes we kept still, watching these alpine specialties go about their business. Their comfort level seemed to increase as they started feeding on small shoots and buds in front of us. With all the excitement and photo opportunities taken care of we relaxed.
As someone once said; “When you do see a Ptarmigan, you know you’ve earned it”, and we had. The birds eventually moved over to the large boulders to sun themselves and preen. It was then we decided to make a move back down the mountain, victorious, invigorated and humbled by this wild place. The final count was 12 individuals, some close to full winter plumage the remainder a mixed, blotchy assortment of grey and white. With the click of a magician’s fingers, it seems, we were lined up at McDonalds, ordering junk food, breathing in fumes and adjusting to the sounds of suburbia. “Did we really see them?” I looked down at my camera. Yes we did! 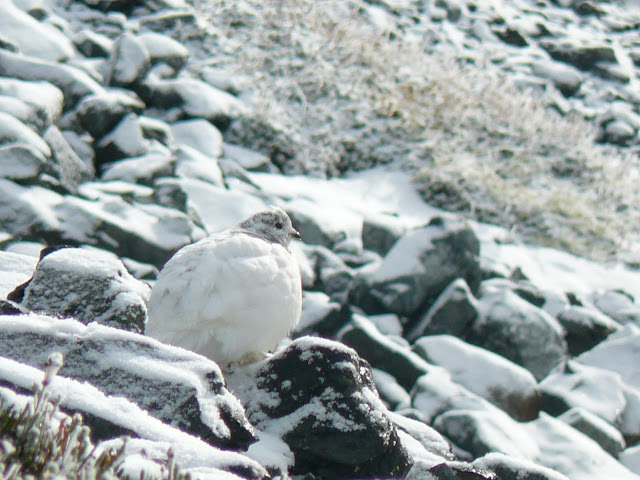