Another early morning for me brings moans and groans and lots of coffee. 3:00 a.m. seems like a good idea the night before, however, if I was going to hear a Marbled Murrelet on Mount Arrowsmith I needed to be on site at dawn. My second serious attempt to hear this small alcid failed again, though I didn’t go completely un-rewarded. Hermit Thrush chorused from the hills along with American Robin and Dark-eyed Junco. At 5:00 a.m. I decided to try tooting for Northern Pygmy-Owl, as this species had evaded me in my survey area. Gray Jays made an appearance first, investigating this strange noise, followed by something I didn’t expect:  American Three-toed Woodpecker! (adult male). 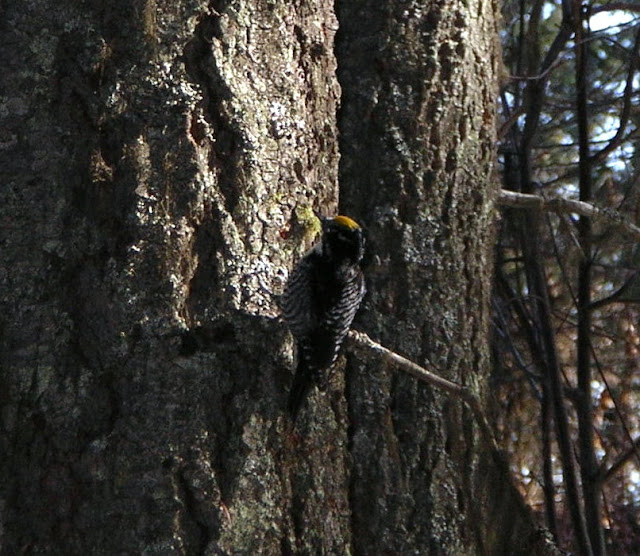 Though I had dreamed of adding this species to my Vancouver Island checklist, I didn’t really count on seeing one. But there it was. It landed about thirty metres away on a snag and began to make its way to the top. Raising my binoculars I gasped! I have seen many of these woodpeckers in the interior, in the Okanagan Valley, but none on the island. The bird then flew across the road to another snag. I watched for a minute then quickly opened the trunk of my car to set up my scope. As I fumbled with my scope and camera the bird took flight up the hill and was gone. I marked the location with my GPS then wrote down some notes. Two minutes later another bird vocalized, this one was a Northern Pygmy-Owl! My sighting was posted on the BC Vancouver Island Bird Forum and the following day, Sandy McRuer, a birder from Port Alberni, went to check it out. Luckily, Sandy relocated the bird and also spotted the female. Another good record for the atlas.