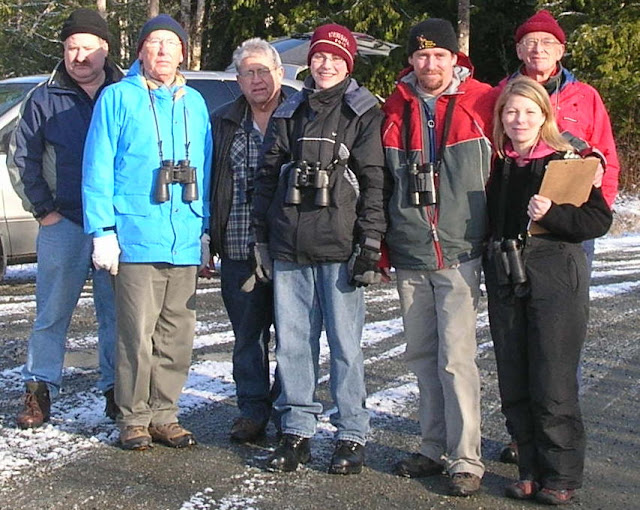 Today was the Christmas Bird Count for the Qualicum and Parksville area. Our team covered Qualicum Beach from Hollywood Road to Seacroft on the beachfront. The Hilliers area, Whiskey Creek, Qualicum town and across the highway to Hamilton Marsh.
Lori and I started our day a little earlier than the rest of our team members by getting up at 4:00 a.m. and went listening for Owls. We started at the Whiskey Creek store where we got our first bird of the day: Northern Saw-Whet Owl. We stopped at regular intervals and listened around Whiskey Creek, Parker Road and then Hamilton Marsh. We heard two more Northern Saw-Whet Owls and two Great Horned Owls.
We were then joined by Dr. John Brighton, another member of our team, at 06:00 am and continued on. On Parker Road we added another two Great Horned Owls and with some local knowledge from John, proceeded to Hollywood Road where we added another species: Barred Owl. Interestingly, the Barred Owl didn’t call after our playback had been used, it simply flew above our heads and into a tree. I wonder how often this happens without our knowing it?
We met with the other members of our team at the bottom of Memorial Drive at 0800am; Ryan and Andrew Cathers, Ron Speller and Dean Hilts. After grabbing some coffee we proceeded with the count. Firstly, scanning the ocean from the brant viewing tower on the Memorial Beachfront. There were lots of sea-ducks, grebes, loons and alcids to count and of course gulls! Next we covered the Parker Road side of Hilliers where we had a nice surprise; a beautiful American Kestrel. The songbirds seemed very thin on the ground though we have had some terrible weather, which has definitely affected them. 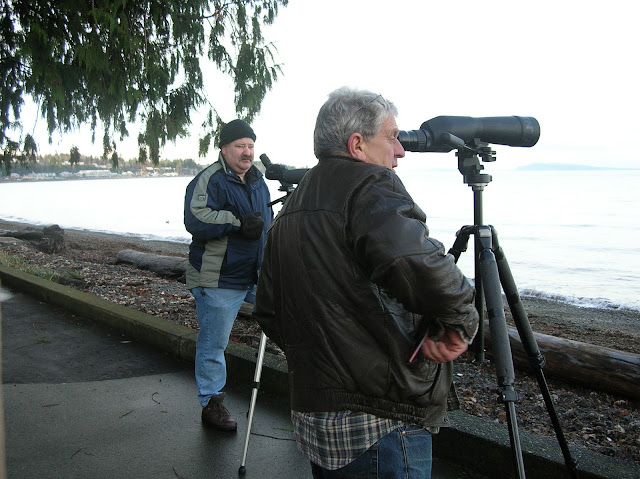 We worked hard for all our birds; slowly but surely we began pegging them off. Andrew had to leave us at mid-day due to work commitments. We continued on into the Whiskey Creek area then decided to split the team for an hour to cover more ground. Lori, Dean and I concentrated on Hamilton Marsh where the going was tough, as the recent windstorms had blown down trees along the trails. After some climbing and scrambling we finally made it to the marsh where we were rewarded with a group of eight Ring-necked Duck. Meanwhile John, Ryan and Ron checked out Milner Gardens where they added to our species list with a much-needed Belted Kingfisher.
At around 3:30 p.m. John and Ron had to leave, so Ryan joined us for the remainder of the day. We scrambled around the town for a while to make sure all the area had been covered then headed back to the beach for one last scan. We said goodbye to Dean as he had family commitments and headed back to Parksville for the potluck dinner. Having reported on our day we headed into Nanaimo to pick up our son Nolan and dropped off Ryan at his home. We finished the day with 68 species. It was the perfect day with good weather, great birds and wonderful company. Just what a CBC should be.