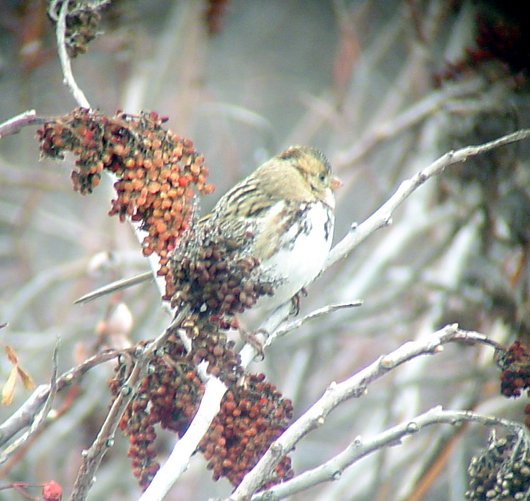 Today Chris Charlesworth and his younger brother Conner, Trevor, my son Conor and I  birded Christmas Island in Salmon Arm. Trevor and I headed around the shoreline with the boys while Chris walked along a trail that ran adjacent to a railway line. As we made our way along the shore, we began seeing birds. There was a group of six Long-billed Dowitchers feeding in the mud, a Northern Shrike perched up on a snag and a Northern Harrier gliding effortlessly over the marsh. Just as we were shouting to the boys to look at the harrier, Trevor’s phone rang. Trevor listened for a few seconds then looked at me with a smirk on his face. He casually said “Harris’s Sparrow!” By the time he said sparrow I was already running. My binoculars were  bouncing off my chest and my scope swang uncontrollably on my shoulder. I ran! Crunch, crunch, crunch was all I could hear as I sprinted my way around the loop of the island and back to the path.
What I didn’t know at that time, when the call came in,  was that Chris had set up his scope and zoomed in on my face prior to phoning, just so he could catch the show! By the time I got to Chris I was panting, sweating, and babbling. He laughed as he told me it was at the back of the reeds. “Pish pish…pish” Pishing is the sound produced by pursing your lips and simply saying pish! Some birders use this technique, an imitation of a scolding group of birds finding a predator. On many occasions this artificial noise will invoke a curious response by nearby birds that come to investigate the fuss. I was pishing alright! The spit was flying in all directions! The sparrow popped up for a second then went down again. I was flapping around, trying to focus and steady myself. This time it moved to the path and began feeding on the ground. I soaked up every moment; scrutinizing the characteristic field marks: pink bill, white throat and dark malar stripe indicating this was an immature bird. Trevor and the boys finally caught up and everyone was able to see it too.