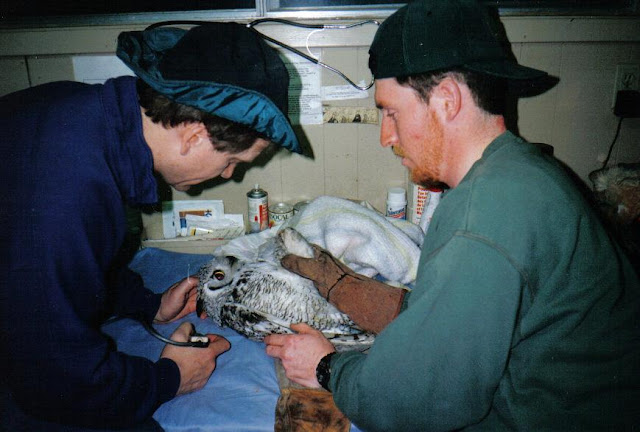 In Alberta, there are two main centres for the rehabilitation of injured raptors and owls. In southern Alberta, there is the Alberta Centre for Birds of Prey. For northern Alberta and up into the Northwest Territories, injured raptors and owls are directed to the Strathcona Raptor Shelter.
The Strathcona Raptor Shelter is run by the A.S.I.B.P., the Alberta Society for Injured Birds of Prey. The executive director is Karl Grantmyre, who started the society in 1987. But caring for injured birds has been a way of life for Karl and his wife Eva for many years. The shelter is located on their property and consists of numerous aviaries, a large hawk house, the main hospital and the recent addition of a wind tunnel.
The aviaries have housed everything from Sharp-Shinned Hawks to Ospreys. The shelter deals with, up to, five hundred birds a year; some sixty species. Frequent visitors are Great Horned Owls, Red-Tailed Hawks and Swainson's Hawks. The birds of the same species are often housed together in large aviaries. For a variety of reasons some birds are unable to be released back to the wild, and some are kept at the shelter to help in fund-raising and educational events.
The large aviary held four Snowy Owls.  These owls were still there from the previous winter, when an unprecedented number were brought into the shelter. Two owls remained at the shelter and the other two would be  be released the following year. Due to an exceptional breeding season caused by the lemming boom, there were far more immature birds around than usual. These birds move south from the northern territories and tundra to winter in Alberta and are easily spotted sitting up on lampposts. All the birds that have been brought in were either emaciated or had been hit by a car. Vehicle collision is the main cause for, at least, fifty percent of the injuries.
Next to the large aviary, was the hawk house; a long building, which is divided into seven different holding pens. These pens hold a variety of different birds, including three Northern Goshawks. The shelter trapped these particular birds as they were taking farmers poultry. They would be released into an area where there is plenty of natural quarry and away from people, as some farmers will deal with the problem themselves!
The newest addition to the shelter was a wind tunnel. This is used in the conditioning of birds prior to release. After not using their wings for a while, injured birds can practice in a safe and controlled environment. The tunnel is about 25 ft long by 10 ft wide. The wind is supplied by a large fan at one end of the tunnel, powered by a generator. There are also perches placed throughout the tunnel to allow the birds to lift off and practice landing.
The other way we evaluate a birds flying ability, is to use falconry techniques. When falconers are training a bird they need to make sure that it has freedom to fly but is controlled so it cannot escape. This is accomplished by attaching leather anklets, or almeri, to its legs; these have a hole through which a leather strap is passed, called a jessie, both of the jessie’s are attached to a swivel. A thin rope, known as a creance, is then attached to the swivel. Using this method we can allow a bird to fly up to fifty metres to make sure that it will be strong enough for release.
Upon arriving at the shelter, new birds are taken into the hospital treatment facility. This is, basically, a large portacabin building with a small laboratory and intensive care room.  Details are recorded into a logbook and the birds are examined. As injuries and infections are not always easily diagnosed, a blood sample is needed. Once the blood is taken, it is placed into a cappilary tube then put into a centrifuge to divide the white blood cells. A refractometer is then used to read the total proteins and white blood cell count to determine if the bird is fighting an infection. Once the cause of the injury or infection has been determined, the appropriate course of treatment is taken. 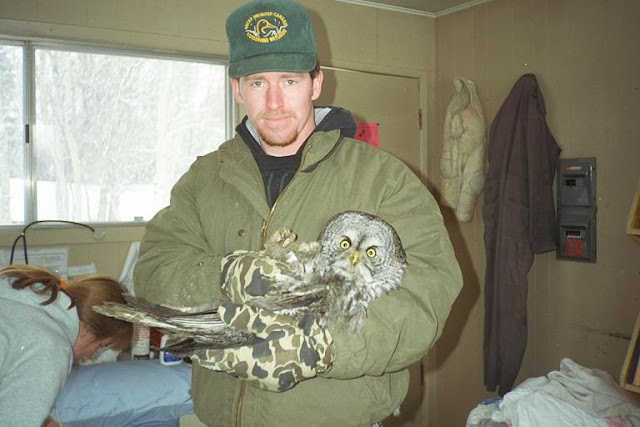 One of my fondest memories, is of a Great Grey Owl that was brought into the shelter in the winter of 1993. It had been found by the side of the highway and had, obviously, been hit by a vehicle. Luckily, the wing was not broken, just a little bruised. The surprising thing about this owl was, despite its size, most of its bulk was made up of feathers. After just two weeks at the shelter, this bird was ready for release. When any bird is ready for release from the shelter it is fitted with a band. This is placed on the tarsus, above the foot and below the knee, and has its own unique number.
The shelter is staffed by volunteers and relies on the generosity of the local community. The local business community has also been extremely generous, donating medical equipment, the hospital building and a large transit van. The shelter also works closely with local veterinarians whose possess a good knowledge of wildlife rehabilitation. Every year, the shelter offers rehabilitation courses run by the International Wildlife Rehabilitation Council, which the volunteers, veterinarians and wildlife officers can take.
Though the shelter is active all year round, there are peak periods when it is extremely busy. During the spring, many young birds are brought into the shelter that have fallen out of nests. When possible, they are obviously returned, but occasionally they have to be looked after before they can be released. The late summer and autumn bring their fair share of young Swainson's and Red-tailed Hawks that have not, yet, got to grips with hunting; during the winter, lots of young and hungry owls.
Being involved with the shelter, for the last two years, has been so rewarding. Not only with helping injured birds, but being a part of a team of people who, like me, feel that what they are doing is a real privilege.