My connection with Canada started about 27 years ago when I was posted there with the British Army. Since then I have lived in two of their amazing provinces - Alberta 1992 - 1995 and British Columbia 2002 - 2011. Whilst living in Alberta I volunteered at the Alberta Society for Injured Birds of Prey and began learning bird banding. In BC I spent 9 wonderful years birding in some of the most pristine and breath taking environments in the world. Added to that, I was fortunate enough to be in the company of some the best birding friends and family I could imagine. Their birding skills were second to none and I owe much of my own experience thanks to their incredible tutoring, kindness and encouragement.  In July 2017 I returned for a family vacation but managed to slip in a little birding, reconnecting not only with the birds and landscape, but with the birders who helped me along the way.


Over a period of 18 days a total of 177 species were recorded. The 08th - 15th July 2017 were spent in the Okanagan Valley in the interior of British Columbia. The 16th - 18th July in the spectacular coastal mountains of Whistler - located 2 hours north of Vancouver, and 19th - 25th July on Vancouver Island. Though July is not exact;y the best month to go birding, we had some great adventures and many incredible birds.  What follows is a brief overview of the species noted and places visited.

Arrived Vancouver Airport 12:35 out of Gatwick. My wife and youngest son Nolan took the float plane to Vancouver Island, I, however, got picked up my good friend Mike force. We traveled east to Kelowna (approx 4 hour drive), stopping in to see another great birding pal: Chris Charlesworth en-route. Nothing too noteworthy on our drive other than Bald Eagle and Red-tailed Hawk but at Chris's bird feeder there was plenty to keep us occupied. Pine Siskin were present consistently during our visit; Rufous, Black-chinned and Calliope Hummingbirds all made appearances,  as did Cassin's Finch, White-breasted Nuthatch and Evening Grosbeak. Nashville Warbler, Veery, Pacific-slope Flycatcher and Western Wood-Pewee were also noteworthy.

Visited two of my old haunts today. Lakeshore drive is one of the first areas I birded on a visit in 2001. Here I birded the area with my son Conor and his girlfriend Jasmine. Usual suspects such as California Quail, Red-tailed Hawk, Turkey Vulture, Violet-green Swallow, Cedar Waxwing were all recorded but best was exceptional views of Eastern Kingbird ( Conor's favourite) and Western Kingbird.

Next we visited Mission Creek. Here memories came flooding back, walking the trails with my kids, birding the area and seeing the Ecolodge where we would hold our Kelowna Bird Club meetings. Red-eyed Vireo was heard and seen next to the ecolodge, Black-capped Chickadee, American Goldfinch, Willow Flycatcher, Spotted Sandpiper were also noted but Pygmy Nuthatch was the target and seen well as was a stunning male Lazuli Bunting.

After a lazy morning enjoying the Okanagan warmth I got picked up by Mike Force. Our destination today was Peachland, as we were to stay at Chris's house overnight to get an early start for a southern Okanagan trip the following day. However, before heading there we stopped in at Robert Lake to see what was around. There was a good selection of ducks to sort through including over 100 Ruddy Duck! Best of all mixed in with the dabblers was an Eared Grebe in breeding plumage. Lots of Yellow-headed Blackbirds around and on a wet field a good selection of shorebirds - Long-billed Dowitcher, Greater Yellowlegs, Lesser Yellowlegs, American Avocet (with young - breeds at Robert lake), Semi-palmated Sandpiper, Least Sandpiper, Western Sandpiper, Spotted Sandpiper, Wilson's Phalarope and Killdeer.


The afternoon was spent birding around Chris's property where a good selection of birds were recorded with great looks at Gray Catbird. In the evening Common Nighthawk were heard over the property and a vocalising young Western Screech-Owl was located. 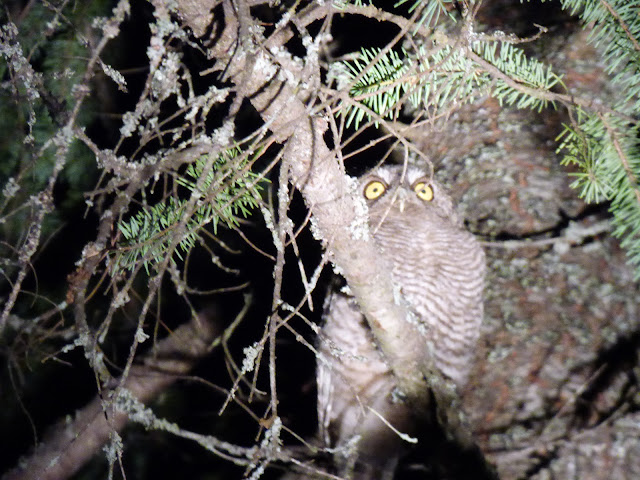 An early departure (06:00am) put at us at White Lake Grasslands for about 07:15 am. We birded the area for about an hour and though didn't connect with all target species (pretty tough to do in July) we did get a few including Western Meadowlark, Vesper Sparrow, Lark Sparrow and Grasshopper Sparrow.


Next headed down close to the BC border where we visited a site which held breeding Great Grey Owl. Luckily we located these incredible birds, getting crippling views of both young and adult. 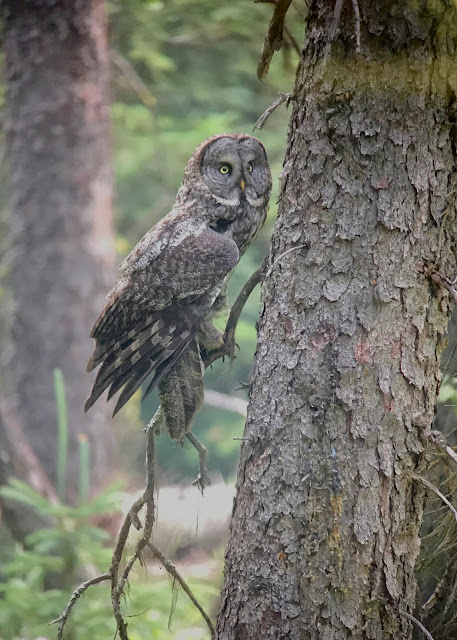 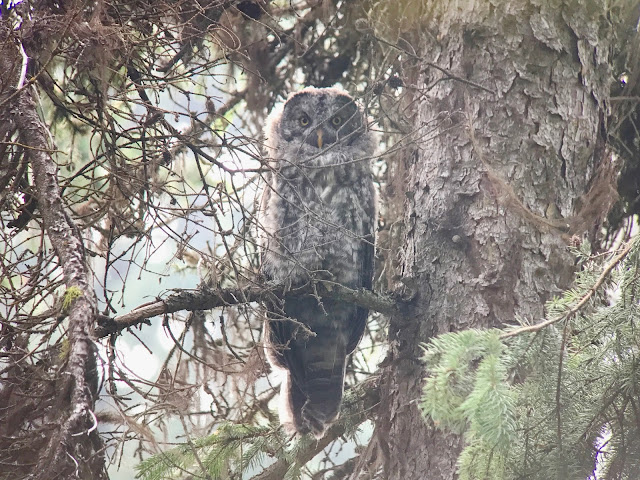 There was a good selection of woodland birds including a very special one and a species I had not seen since 2005 - Williamson's Sapsucker!


By 12:30 we were birding the Rock Creek area of Kettle Valley. Here we continued to add very specialist birds to our ever growing species list including Lewis's Woodpecker, Black-backed Woodpecker, Olive-sided Flycatcher and Golden Eagle.

The next two stops included the famous Road 22 and Vaseux Cliffs. The harsh winter and wet spring had not been favourable for the Bobolink at Road 22, however, luck was on our side and we got good scope views of a single adult bird. Yellow-breasted Chat were present, two singing birds but no views were had. At Vaseux Cliffs, all targets were recorded including Rock Wren, Canyon Wren, Chukar and White-throated Swift. 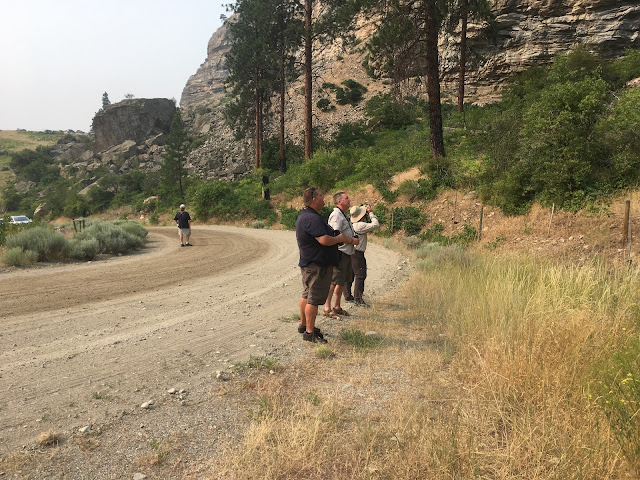 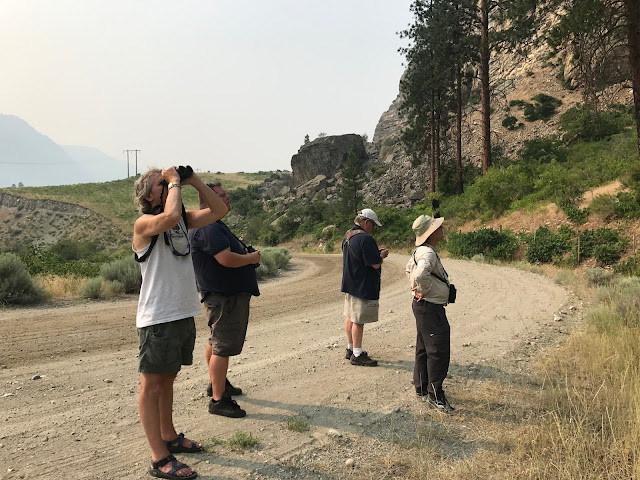 Today I was back out with Chris Charlesworth and Mike Force, birding the Big White area. Our first stop was in North Glenmore where connected with my first and last Swainson's Hawk of the trip. Next stop was the Black Mountain area where we got cracking looks at a family of Western Kingbirds.


We then continued on taking Three Forks Road towards Big White. Here we added Ruby-crowned Kinglet, Northern Waterthrush, Red Crossbill, Lincoln's Sparrow and Varied Thrush. Though we got the grand slam of chickadees - Black-capped, Chestnut-backed, Mountain and Boreal! the bird of the day goes to American three-toed Woodpecker! To be precise we found a nest! 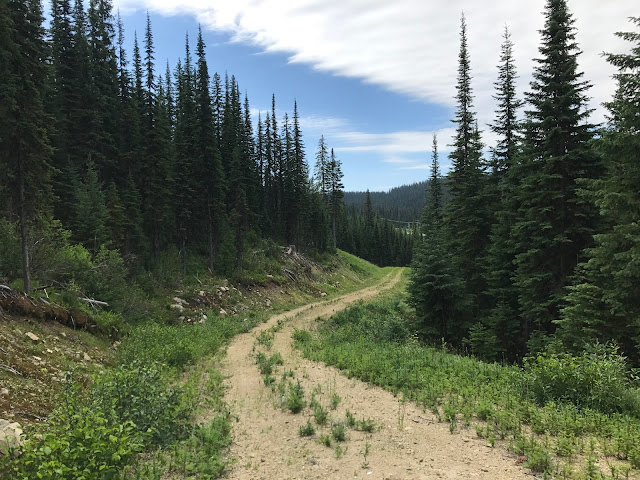 The afternoon was spent with my daughter Emily who took me on a hike around Bear Creek Park in West Kelowna. It was 30+ and I really didn't expect many birds but to my surprise we located 3 Lewis's Woodpecker, Lazuli Bunting and a nesting Osprey!

One of my favourite places to visit when living in the Okanagan was Beaver Lake Road. The grasslands and woodlands hold a good variety of birds as well as many wonderful memories for me, so returning here was a real treat. One of my most fond memories was checking the bluebird boxes with my daughter Emily. Doug Kragh, Mike Force and I birded from about 08:00am to 12:50 and recorded around 56 species. My target bird Western Bluebird was present (seen by other birders that morning) but was a no show for our vigil, though we did get Mountain Bluebird. Top bird on this excursion goes to a female Pine Grosbeak, feeding close to the lodge by the lake. 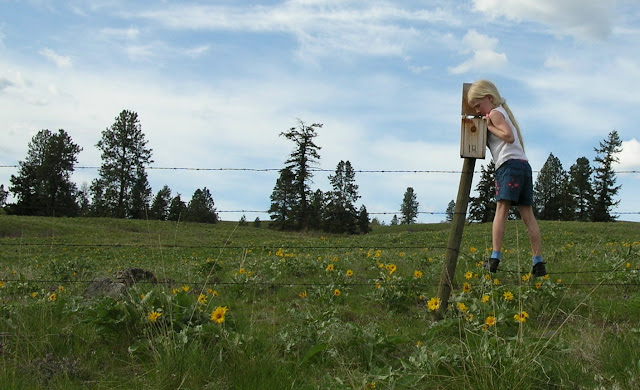 With time running out in the Okanagan Mike Force, Chris Charlesworth and I headed down to Penticton for our last mornings birding. It was a fun few hours with these guys and my best ever look at Flammulated Owl! 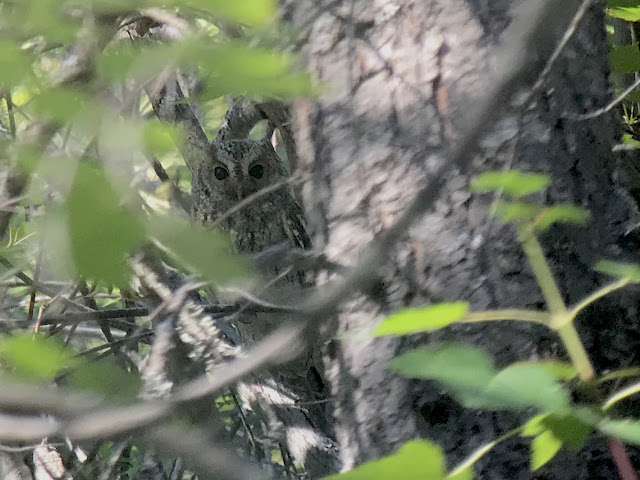 This part of the trip was concentrated mainly around family fun and activities though a visit to the summit of Whistler Mountain produced 2 new species for the trip - American Pipit and Horned Lark! 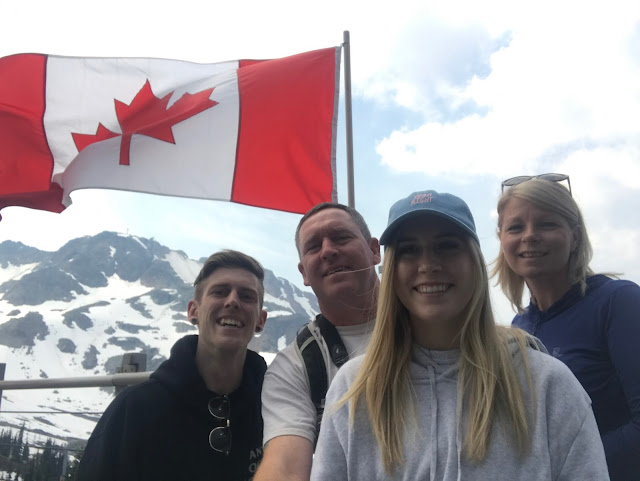 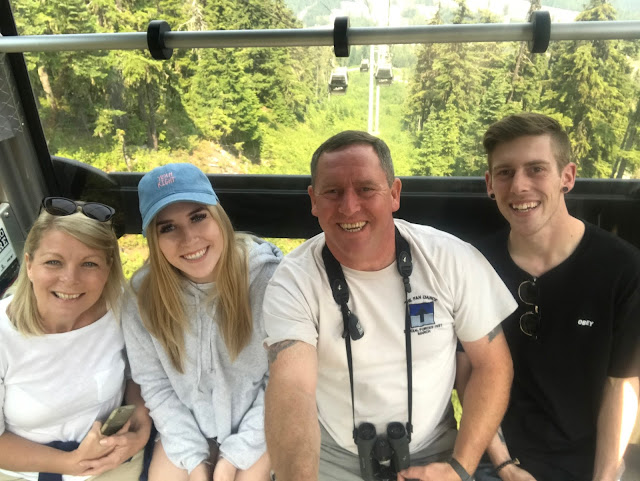 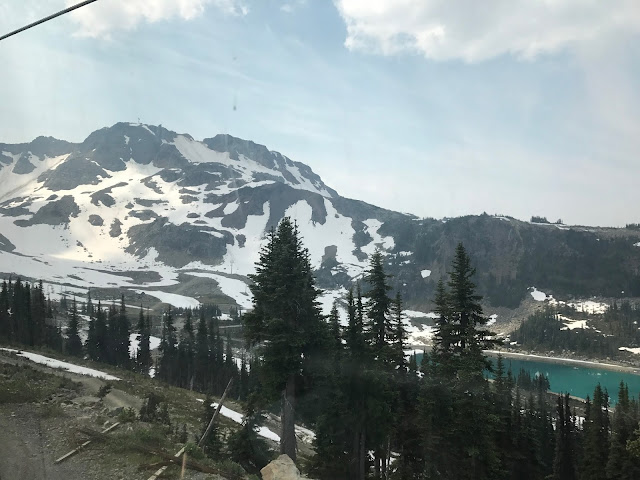 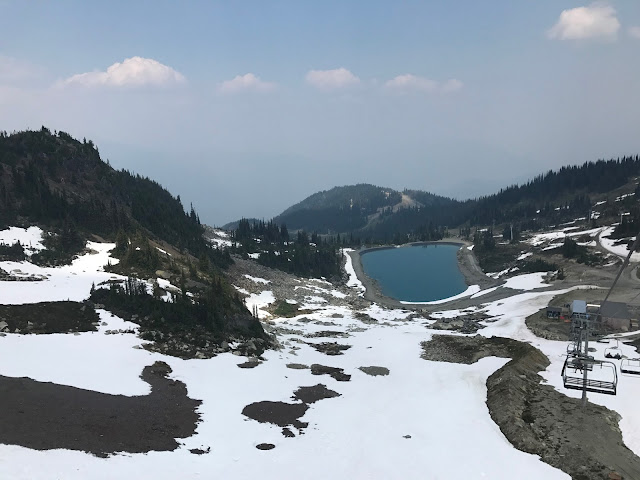 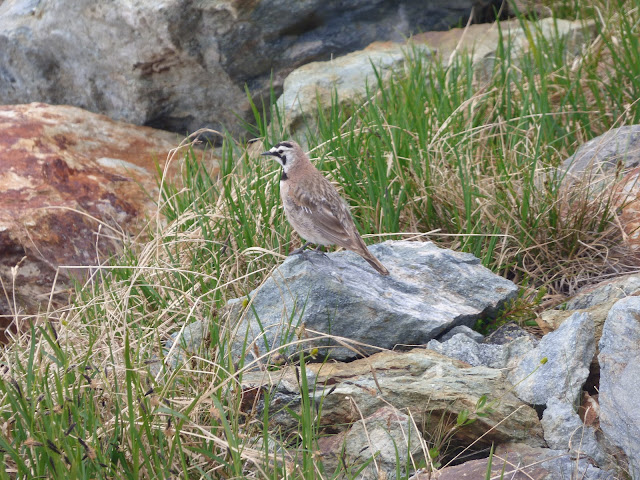 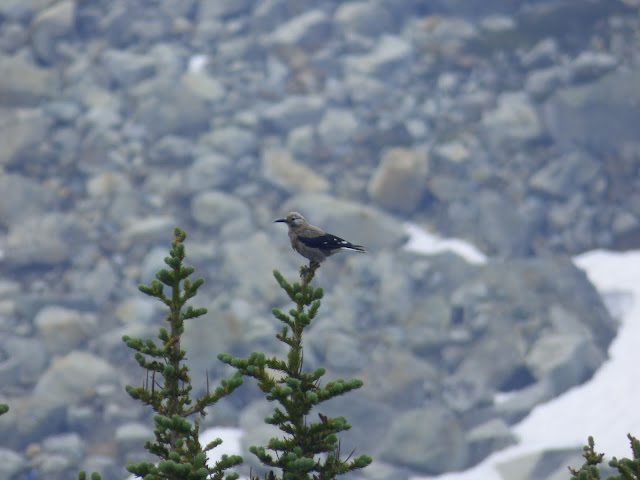 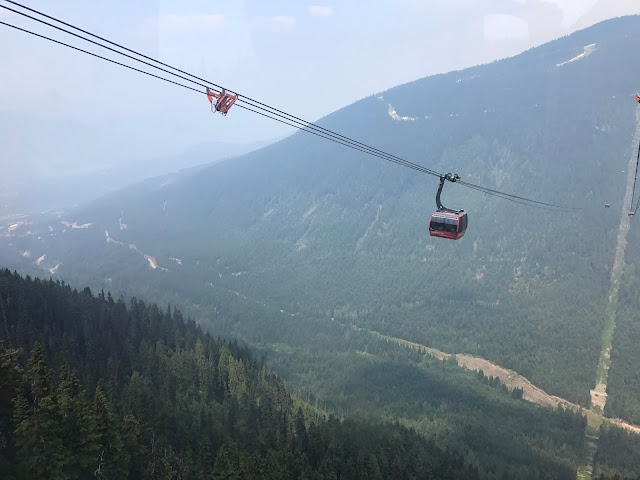 The ferry from Horseshoe Bay to Nanaimo didn't produce much other than a few Glaucous-winged Gulls and Pelagic Cormorant, though on arrival Black Turnstone, Black Oystercatcher and Peregrine Falcon were noted. A high tide at the Englishman River Estuary proved unproductive with 5 Least Sandpiper present and the sea wasn't much better though Marbled Murrelet, Double-crested Cormorant and Surf Scoter were seen. 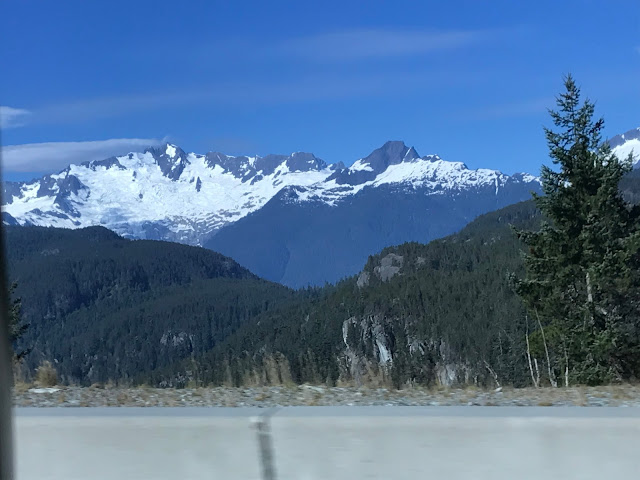 Just a couple of hours birding around town this morning, very quiet though I did add Bushtit to the list with a party of about 20 individuals and some lovely scenery at Little Mountain. 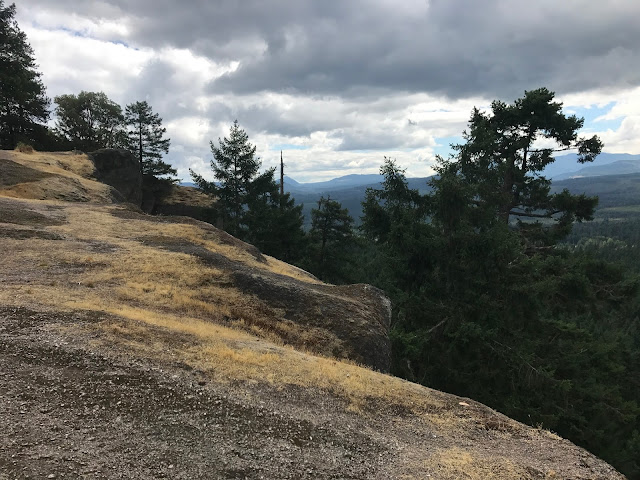 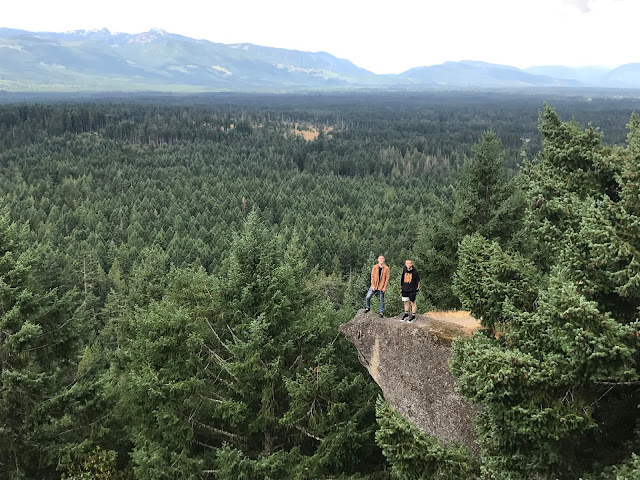 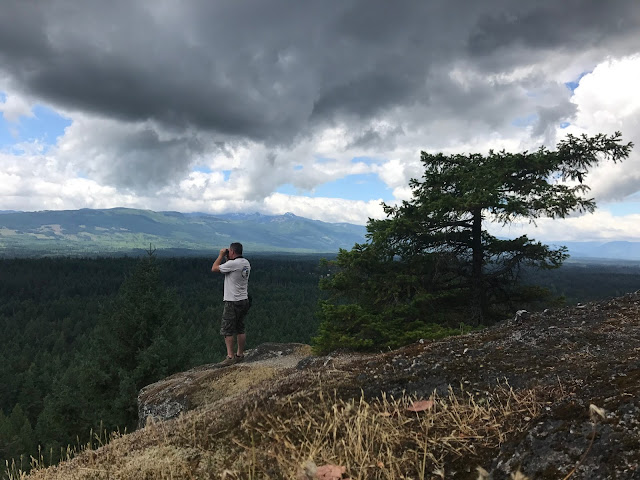 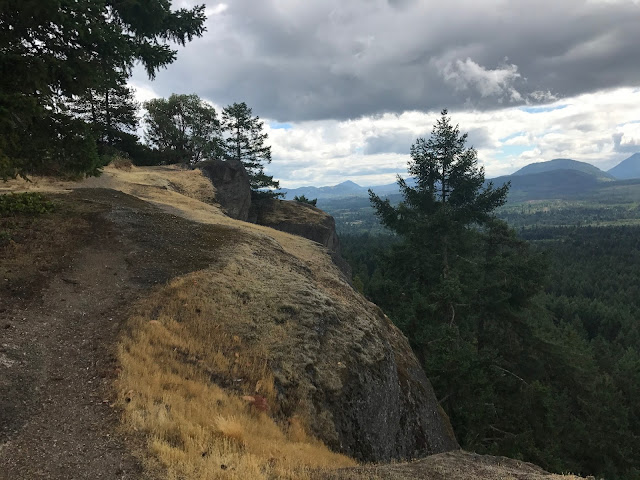 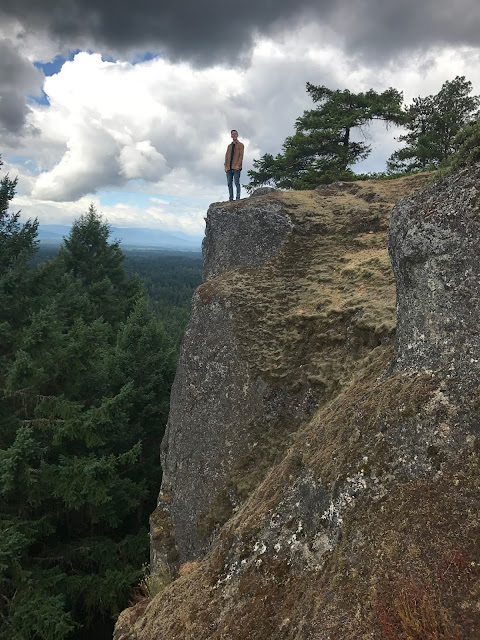 Today I had the pleasure of once again birding with Guy Monty, an extremely well respected biologist and birder, and, who just happens to be my father-in-law. Guy is well known on the island and has been actively involved in many projects that have help protect the islands flora and fauna. Our first stop was Tim Hortons, of course, but following that we got to the Englishman River estuary around 0745. There was a good selection of shorebirds to scan through with Long-billed Dowitcher, Semipalmated Plover, Semipalmated Sandpiper, Western Sandpiper, Least Sandpiper and Killdeer present. The only other real sighting of note was a River Otter seen on the beach. 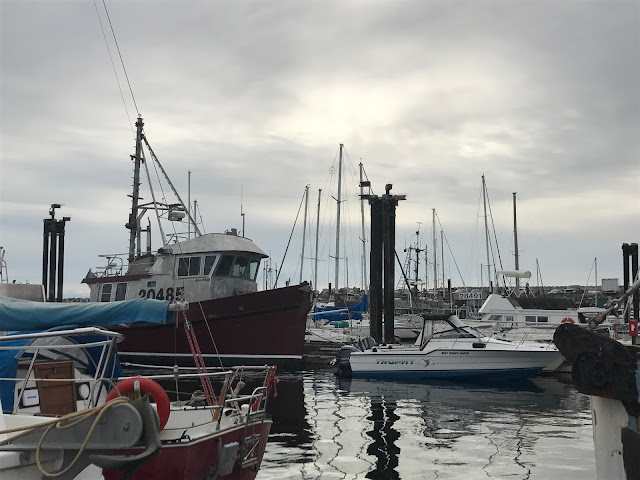 At French Creek Marina we checked on the Purple Martins that nest there and also noted a Greater Yellowlegs in the Chanel. Next we checked Columbia Beach where we got a few alcids - Pigeon Guillemot, Marbled Murrelet and Common Murre. There were 2 recently fledged Bald Eagles from a local nest sitting on someones house and migrant Osprey seen.

Our final stop was at Little Qualicum Fish Hatchery where we had a good selection of birds including Black-headed Grosbeak, Black-throated Grey Warbler, Band-tailed Pigeon, Western Tanager, Hammond's Flycatcher and Hutton's Vireo.

Another 1//2 day birding with Guy Monty today. We started with a drive up Rivers Edge road which produced another good selection of birds with Hooded Merganser, Cooper's Hawk, Willow Flycatcher, Yellow-rumped Warbler, MacGillivray's Warbler and Hairy Woodpecker present. Another hours vigil at the Englishman River Estuary produced a similar selection of shorebirds with the exception of 2 new species including a calling Short-billed Dowitcher and Black-bellied Plover on the beach.

Today I said goodbye to family including my wife and youngest son who still have just over a week left. Its been an incredible 2 weeks, catching up with family, seeing old friends and getting reacquainted with the amazing birds of Canada. 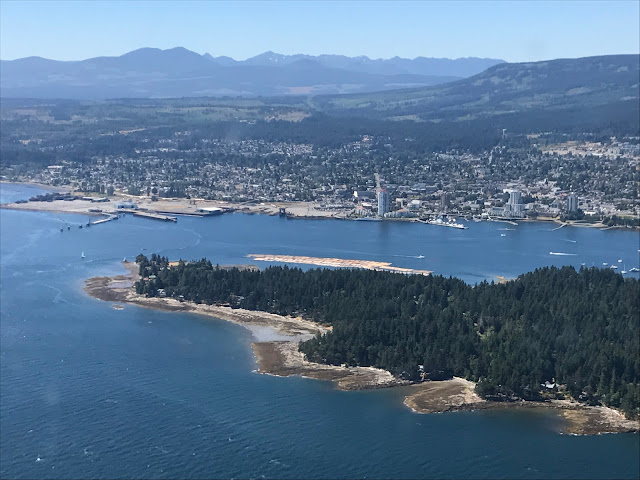